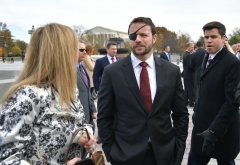 Republican House member-elect Dan Crenshaw is seen after posing for the 116th Congress members-elect group photo on the East Front Plaza of the US Capitol in Washington, DC on November 14, 2018. (Photo by MANDEL NGAN/AFP via Getty Images)

(CNSNews.com) - Rep. Dan Crenshaw (R-Texas), a former Navy seal, told Fox News on Wednesday that so many people hyped up the day that some Republican members of Congress planned to object to the certification of the Electoral College votes for Joe Biden as “a day of reckoning,” but when you use that language, you shouldn’t be surprised if people tend to believe it.”

Crenshaw called the storming of the U.S. Capitol “atrocious,” and he also objected to the mob carrying the U.S. flag into the Capitol Building as if it was “some patriotic duty.”

“It’s atrocious. We’re watching our fellow Americans storm the Capitol, and what disturbs me the most about seeing some of it is these American flags being carried in it as if this was some patriotic duty. I recall wearing an American flag on my shoulder as I stormed my enemy and the enemies of our nation. That’s what the flag is for, to defend this country against our enemies,” he said during a phone interview on “Special Report with Bret Baier.”

“The people in this Capitol are not your enemy, right? These are our fellow Americans. This is not what you do and call yourself a patriot. There’s nothing to be proud of here. This is not okay. It should be condemned to the fullest extent, and I'm just saddened I think more than anything and disappointed by what I’ve seen. It’s unacceptable,” the congressman said.

Baier asked Crenshaw what he has about whether the Save America Rally and what President Donald Trump said to attendees stirred up the crowd and led to what happened at the U.S. Capitol.

“So many hyped up this day as this day of reckoning as this big win that would happen. So many people said this would be the last stand, the last fight, the last effort to win back the republic.It’s our 1776. When you use that kind of language, you should not be surprised if people tend to believe it, and a lot of people thought this was a game,” the congressman said.

“Now to them, it was all performative politics, but to others who were misled and deliberately angered, this is real, and it became very real, and it’s not okay, and I want to say something else here. This is exactly what we can expect every four years if we were to deem this process constitutional. This process is not constitutional. The founders envisioned this,” he said.

“They knew that if you put power within a single body, then that power or that body would receive all sorts of pressure to do what people wanted it to do. This is why we diffuse power to the states, choose electors and elect a president. This is exactly what we could expect every single time if we decide that this process is constitutional, this objection process, and we decide that Congress can simply overturn electors.

We’re seeing it play out right before our very eyes, and many of us have said this all along, this is why you can’t do this, you cannot set this president, and we did. We have to stop it. This is a deeply unconstitutional process. I wanted President Trump to win, but I as a member of Congress cannot overturn an election. This is fundamentally what this is about, doesn’t mean that people’s anger about election irregularities and the bad processes that we see in many states are invalid.

Those are very, very valid concerns, and they must be addressed, but we must address them in the right way. We can change laws at the state level. There needs to be a year 2000 Florida awakening for each of these states where we clean it up and we give people certitude that their vote really counts. There’s nothing more important than this democracy, but there couldn’t be a worse way to solve it than by what happened today.

When asked what Trump’s response should be, Crenshaw said he wanted “everybody out in front of those protesters as they were storming the Capitol to be there and say stop.”

“That’s the only acceptable outcome, but you've got to man up and go down there and say enough is enough. This isn't okay. I want them to say that they misled them, because I think that’s really what happened here, and that message has to be far more forceful than it’s been,” he said.