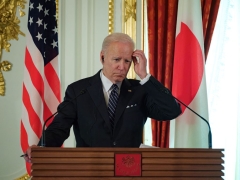 (CNSNews.com) – Rep. Claudia Tenney (R-N.Y.) criticized President Biden’s response on Taiwan, first saying he would get involved militarily should China invade Taiwan and then walking that back, saying “our policy has not changed.”

“This is incredible. I think what we're seeing right now is the zombie apocalypse in the White House. You've got a guy walking around. I'm not even sure he's aware of what's happening, and there’s the people behind the scenes that are shuffling and trying to walk this back. This is the third time Biden said we're going to go to war and taking it back by White House officials,” she told Fox Business’s “Mornings with Maria Bartiromo.”

“We have to be definitive on our policy with Taiwan. Taiwan is vitally important, something like 80% of our chips are manufactured there,” the congresswoman pointed out.

“Again another problem we have in the United States with allowing this globalism and our overseas production instead of bringing it back here, something President Trump worked on, a reason we had the Tax Cuts and Jobs Act to incentivize Americans to bring jobs here, to bring our technology here, something I've been fighting for even when I was a member of the state assembly, but this is scary,” Tenney said.

“This is a real war with our greatest adversary and biggest enemy, the people's republic of China, and I’m very concerned that this guy just cannot be sending mixed signals to our enemies. We already have a disaster and tragedy occurring in Ukraine with Putin who projects power but does not have the actual power that China has. This is getting crisis level. It's beyond crisis level. It's an emergency for the United States at this point with this man as commander in chief,” she said.

Tenney said that the U.S. has tried “for many years to get a consistent, strong policy on Taiwan.”

“They're a great ally. They're looking to us for leadership. It's been an iffy question. We don't want to provoke China, but at this point, we were all worried about provoking Russia and Putin,” the congresswoman said.

“Our weakness has projected by this and the confusion sent by the Biden administration has been a provocation for war all around the world. Our adversaries know we are weak and our allies are concerned about the strength and our reliability. We're not reliable anymore and Biden is projecting that and the Taiwanese are very concerned about where our position is,” she said.

“I think we need to be forthright. I think a treaty would be helpful. That's been something we haven't been able to get done because we're worried about China and we are as the United States are not in a strong position to be negotiating from strength in a treaty in that situation. You just talked about energy throughout the morning. That is a huge factor right now,” Tenney said.

“Not only was it a factor that caused Putin to invade Ukraine, it's a factor that's putting the United States weak on the world stage and affecting our economy, so we aren't in a position where we are going to be negotiating a treaty from strength. That's my biggest concern strategically. We need a complete course correction here. We need to have new leadership,” the congresswoman said.

“We need to have someone that understands the global threat we have with China intervening with the belt and road initiative on energy and everything else they're doing to surround us and we're standing here with a guy who, again, looks like a zombie wandering around the White House with unnamed staffers be in the background who are really running the policy behind the scenes,” she said.

Tenney said that Biden is “the most compromised president in American history when it comes to China policy, whether it's Hunter Biden, the entire scenario.”

“He is illiterate on this issue, global foreign policy illiterate, as you cited all morning, completely illiterate on the energy policy. These people behind the scenes are running it. They’re destroying New York. That same policy in New York is hurting us here,” the congresswoman said.

“This is a matter of a guy who has been nothing but a talentless, career politician who’s been able to get elected because of Democrat incumbency for 40 or 50 years and now all of a sudden he's commander in chief, needs to be accountable and he is just incapable of this job. He doesn't have the leadership skills,” she said.

“Now he doesn't have the cognitive skills, and people behind the scenes who’ve never run a business, who’ve never done anything to significant to really hone their strengths and their leadership skills, is running the most important nation in the world,” Tenney said.

“The leader of the free world is just not capable for this task on any level, across any sector that you’ve discussed daily on the show, and I think you’re exactly right, Maria. He is so compromised when it comes to China, and a he's afraid to deal with the Taiwan issue, which is critically important to the United States right now, and the Chinese know it and that concerns me a great deal,” the congresswoman added.