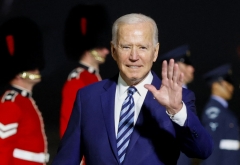 “The increase in the military is one or two percent, and yet we're facing an increasing threat from China, and we're not keeping up, and so his priorities are all kind of messed up on what we really need in America to strengthen ourselves, protect ourselves at the border, protect ourselves militarily from aggression, from around the world,” Gimenez said.

“And so it's not something that was unexpected, because everything he says, it's all about the Green New Deal and this extreme left agenda that apparently is driving the president and the Democrat Party,” the congressman said.

On infrastructure, Gimenez said he doesn’t think a bipartisan deal will be made in the House, it may happen in the Senate.

“I don't think a bipartisan deal is going to be made in the House. I think if anything, it's going to come out of the Senate. I have not slept. We just finished up a mark-up on the surface transportation bill. That's $550 billion, half a trillion dollars just on that. A lot of it, most of it has to deal with emissions, Green New Deal stuff, electric cars, electric charging stations, very little on surface transportation, on improving our roads and highways and bridges, a lot with mass transit,” he said.

“So really what the Democrats want you to do, they want to force you into mass transit systems, even if you live out in the rural areas where mass transit doesn't work, they want to force that on you. They don't want to expand the highway system. They don't want to expand roads. We're 95 to 97% of Americans spend their time in their car on the roads, we're not going to be really looking at that,” the congressman said.

“We're looking at how we can have billions of dollars for charging stations that by the way, the electric car companies like Tesla and Ford and all the others are already building out these charging stations. Why do we have to build charging stations up for 2% of the cars that we have on the road right now,” Gimenez said.

Bartiromo pointed out that electric cars aren’t resonated with the American people, adding that sales haven’t gained much traction.

“Well, look, and if you look in the neighborhoods where the electric cars are, they're all rich neighborhoods. If you go into the poorer neighborhoods, middle class neighborhoods, nobody has an electric car. Why? Because they're too expensive, and yet we're subsidizing the cars for who? The rich people. So it makes no sense,” the congressman said.

“There's an attack in this bill on truckers. They're going to raise the minimum insurance requirements from $750,000 right now, which is what a trucker has to have, to $2 million. That means, hey, you just talked about inflation, well, everything that we buy is -- it's transported by these truckers, so they're going to have to pass that on to us. That means that, again, the inflation rate's going to go up and who gets hurt the most when inflation hits? The poor and the middle class,” he said.

He said that Democrats “want to spend all this money on infrastructure, and then we put amendments to streamline the process for major projects, and every single one of those amendments was knocked down."

“It takes seven years for a major project to go through the federal process, and so if you really want to have an impact with infrastructure, you need to streamline that process. Every single one of our amendments was knocked down,” Gimenez added.