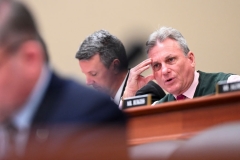 (CNSNews.com) – Rep. Buddy Carter (R-Ga.) said Tuesday that while he does believe in climate change and believes that “man does have somewhat of an impact on it,” it’s “cyclical,” and he warned that the United States should have “an all-of-the-above type energy strategy where we utilize and unleash our American energy potential here.”

Carter said that liberals “blame climate change for everything.”

“If you've got a problem, it's because of climate change. That's ridiculous. Look, I believe in climate change, and I believe we need to address it, and, yes, man does have somewhat of an impact on it,” the congressman told Fox Business’s “Mornings with Maria Bartiromo.”

The congressman warned of the damage that the Inflation Reduction Act will do not only to research and development of life-saving medicines but to the energy sector.

“First of all, the Hippocratic Oath tells us do no harm, and what the Democrats have done here is to do harm. We all want to bring prescription drug prices down - no one more than I do. I was the one on the other side of the counter who had to tell the patients how much their medicine was going to be,” he said.

“I watched senior citizens as they made the decision paying for their medicine and paying for their grocery.  I saw mother who was in tears because she couldn't afford the antibiotic for a child. So I want to bring prescription prices down but this is not the way to do it. This will kill innovation. It will kill research and development,” the congressman said.

“In over 40 years of practicing medicine I have seen nothing short of miracles as a result of research and development. We cannot afford to lose that hope, that hope of having cures for ALS, for cancer, for Alzheimer's. We've got to have that, but this bill, it's going to result in fewer cures, because we are not going to have the researching and development that we need in order to have innovation,” Carter added.

When commenting on the climate change provisions in the bill, the congressman agreed with JP Morgan CEO Jamie Dimon, who said during a recent client call, “Why can't we get it through our thick skulls that if you want to solve climate change it's not against climate change for America to boost more oil and gas, meaning natural gas.”

“He's absolutely right, though, we've got to use natural gas. Look at what we've done in the United States of America over the last decade. We have decreased our carbon emissions more than the next 12 countries combined while growing our economy. It can be done and part of the reason we've been able to do that has been natural gas, and natural gas here is 47% cleaner than that in Russia,” Carter said.

“We've got to be able to export that natural gas. This is what the developing countries, this is what they should be doing. We've got to have innovation in this country. With the Democrats, they think if it's not wind and solar, it's no good. Well, that's totally wrong,” he said.

“We’ve got to utilize nuclear, and we’ve got to utilize fossil fuels. They've gotten so much cleaner as a result of innovation that has come about by the private sector. If we would get out of the way and let them do what the market dictates, then I can assure you, we would be able to export clean energy,” the congressman added.

Carter agreed that Republicans need to counter Democrats on the issue of climate change, saying that “it’s all a matter of articulating that we produce clean energy here in America.”

“Look, if America and Europe were to go to net zero emissions, we still wouldn't solve the global problem. That's what the Democrats don't realize is, it's China and India and the developing countries that have -- that are adding the most to carbon emissions and they have admitted that they are going to continue to use the cheapest, the most reliable energy out there whether it'd be coal or whatever,” he said.

“They don't care. They just want to grow. Well, if we can help them in the United States by exporting innovation that will help them grow while still being cleaner then we will solve this problem,” the congressman said.