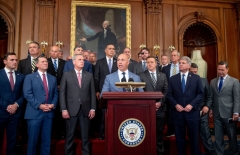 Representative Brian Mast (C), Republican of Florida, speaks alongside fellow Republicans including US House Minority Leader Kevin McCarthy (center L), Republican of California, about the US military withdrawal from Afghanistan, criticizing US President Joe Biden's actions, during a press conference at the US Capitol in Washington, DC August 31, 2021. (Photo by SAUL LOEB/AFP via Getty Images)

“Not at all,” Mast told Fox News’ “Fox and Friends” when asked whether the analogy works. “I think she is just strictly historically ignorant, tactically illiterate. She has no reference point of any of this. When you look at making a comparison like that. There were bad actors on January 6th.

“Nobody is going to deny that, but the tens of thousands of Americans that were there at the capitol to exercise one of their five basic freedoms that America is all about, to assemble and to petition their government to compare them to Japanese kamikaze pilots or Saudi Arabian suicide pilots, to make that comparison about patriotic Americans, and think, what, they were staging,” he said.

“You know, that was their launching point to stage what they call an insurrection with, what, Trump flags and the red, white, and blue? It’s so illiterate and ignorant to make this comparison. It's disgusting,” the congressman said.

“I felt what I have felt this entire year from the Biden administration, Harris, all of their propaganda enablers in the media and everybody else. I think you can sum them up in one word, and that would be hypocrisy. That's what this whole administration is all about. They’re going to call January 6th, all of those things an insurrection,” the congressman said.

“Nobody’s been charged with insurrection by the way, but they’re going to forget that hundreds were arrested between the Supreme Court and the Senate during the Kavanaugh hearings or that the White House in the summer of 2020 was surrounded, literally surrounded by BLM with hundreds of members of Congress on the White House grounds and many of them attacked like Rand Paul as they were leaving the White House,” he said.

“That wasn't an insurrection or they’re going to forget about the four months, five months, six months of anarchy and burning cities and you can't go in certain parts of Portland. None of those things happened. It's all summed up with the word hypocrisy,” Mast added.