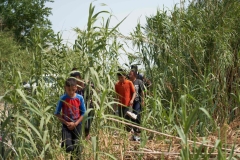 Migrants who illegally crossed the Rio Grande River walk through brush in Eagle Pass, Texas, on May 22, 2022. (Photo by ALLISON DINNER/AFP via Getty Images)

(CNSNews.com) - Rep. Beth Van Duyne (R-Texas) told “Sunday Morning Futures” that areas along the border that were once Democrat strongholds are now in play for Republicans, because they’ve seen how failed liberal policies destroyed their communities.

The congresswoman said the Biden administration is lax on the border because they believe that the migrants that come in will vote Democrat.

“They’ve seen almost 200 potential terrorists have already crossed the border this year alone. The administration has admitted it. They understand it’s a problem. They’re culpable in it. The question is, what are they going to do about it? What are the answers that they’re bringing to the table other than taking away all the tools that CDP actually has to be able to address the problem,” she said.

“It’s interesting though that you brought up the November elections, because when we start thinking about what the long-term plan is by having all of this on border insecurity going on right now, I think it’s honestly to be able to have people come in that Democrats believe are going to vote for the Democratic Party, but it’s amazing when you start thinking about what’s going on in Texas down on our border,” Van Duyne said.

“Areas that historically have been Democrat strongholds, those congressional seats now are up for play, and the reason why they are is the folks that have lived there for decades have lived under the failed liberal policies and are seeing their communities absolutely destroyed,” the congresswoman said.

“They’re sick of it, and those races now are actually in play for Republicans, because they have seen how these liberal policies have just destroyed their communities,” she said.

Van Duyne pointed out that Americans coming back into the U.S. have to go through protocols and be tested because of COVID, “and yet we are allowing literally millions of illegal immigrants at our border to come into our border without being tested, and it makes no sense.”

Contrary to what DHS Secretary Alejandro Mayorkas has said, Biden’s border policies are not working, the congresswoman said.

“And let’s face it. If their policies were working, if the border was closed, why do we have over 2 million folks enter illegally last year? Why have we already in May had over 1.2 million that we can identify already enter the country illegally this year? Why did we have 11,000 pounds of fentanyl enter last year?” Van Duyen said.

“The border is not closed. They have done everything that they can to make sure that that’s the case. It is destroying our country, and quite honestly, I appreciate Rick Scott’s frustration, but Biden’s not going to go anywhere. He is not going to resign, because this is all part of their strategy,” she said.

“This is all very well calculated, and if Biden resigns, then we’ve got Kamala Harris, our czar who hasn’t even been down at the border, who hasn’t even talked about solutions, and then if Kamala Harris resigns, who do you have? Nancy Pelosi, who hasn’t bothered to even bring forward any immigration reform, any border control strategies to any of the hearings that we have in the House,” Van Duyen said.

“This is planned. This is calculated, and this is– the entire Democrat Party is to blame for this,” the congresswoman said.