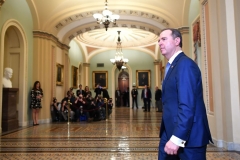 House Impeachment Managers Adam Schiff walks to the Senate chamber before the Senate impeachment vote on Capitol Hill in Washington, DC on February 5, 2020. (Photo by MANDEL NGAN/AFP via Getty Images)

(CNSNews.com) - Rep. Adam Schiff (D-Calif.) said Sunday that the Republican Party is not interested in governing, and that it is “an autocratic cult” around former President Donald Trump.

“We will do that, but we need to show that democracy delivers, that it can help people put food on the table, that it can address these huge disparities in income. There's so much reason why our democracy is at this fragile point right now, and we need to foremost deliver on the economy, but also on-- on voting rights and stop these efforts to disenfranchise people,” he said.

Host Margaret Brennan pointed out that in Schiff’s book, “Midnight in Washington: How We Almost Lost Our Democracy and Still Could," the congressman says “preparing the battlefield for the struggle to overturn the election, should they regain majorities in Congress, they might be successful.”

“You're saying we're on the cusp of a constitutional crisis?” Brennan said.

“Yes, and this is really why I wrote the book, because I want it to sound the alarm that our democracy is hanging by a thread right now,” the congressman said.

“As a member of the January 6th committee, you know, I have to acknowledge there may be another violent attack on the Capitol, but what is even more pressing a threat is what we see Republicans doing around the country taking this big lie about the last election and running with it,” Schiff said.

He said he wanted to tell the story in his book about how that happens and how in four years our democracy becomes so threatened.

And one of the terrible realizations for me is that so many of the people I worked with across the aisle, who I admired and respected because I believe that they believed what they were saying, turned out not to believe it at all. That the only thing that they cared about was the maintenance of their power or position,

And I want to show people how that happens, how-- how people start by making small compromises of their morality and their values and their ideology and end up completely capitulating because one of the things we discovered in-- in the impeachment trial, but really both trials is that there's nothing wrong about our Constitution.

The provisions are brilliant, but unless they're animated by people who-- who give content to their oath that-- that understand the importance of right and wrong, none of it works.

And right now, we saw Grassley in Iowa yesterday, unable to condemn the President's effort to-- to get the Justice Department to overturn the election. Scalise this morning, another Republican leader unable to acknowledge that the election wasn't stolen. It's these personal capitulations that are putting our country at risk.

Brennan asked what responsibility Democrats have “for damaging the faith of the country.”

“Look, I think Democrats have been defending our democracy for the last five years. We have put up a valiant fight for the heart and soul of this country, so I really can't lay the blame at the Democratic Party,” Schiff said.

"Well, look, I-- as I acknowledge in my book, there are lots of things I could have done differently or better, but at the end of the day, one of our two great parties has completely abandoned its ideology,” Schiff said.

“It has made itself an anti-truth, anti-Democratic cult of the former president, and the responsibility is on that party to once again become a party of ideas, and there are some hopeful signs, and one of the-- the things I want to emphasize in the book, too, is there are also some great profiles in courage that emerge from this period,” he said.

“One of them you're going to have on your show later today, Fiona Hill, but Marie Yovanovitch and Alexander Vindman, people like Dan Coats, you know, Republicans like Dan Coats, who-- who did their duty, defended the intelligence community wouldn't carry out the president's big lies, and we need to be inspired by those examples because we all have a role to play right now in the preservation of this democracy,” the congressman said.