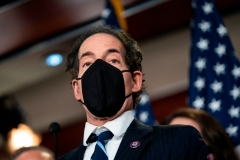 House impeachment lead manager Representative Jamie Raskin speaks to the press after the Senate voted to acquit former US President Donald Trump, in the US Capitol in Washington, DC on February 13, 2021. (Photo by ALEX EDELMAN/AFP via Getty Images)

Raskin said a number of Republican senators, including McConnell “are aggressively trying to disentangle themselves” from their vote to acquit Trump.

“McConnell went right to the floor to say that he was convinced that Donald Trump was morally and physically responsible for this attack. I mean, I would have liked to have had him on the impeachment managers team based on the way he presented that, except then he went back to the completely counterfeit argument that the Senate couldn't conduct a trial of Trump's impeachment,” Raskin said.

“Although, he was impeached during his presidency for acts committed in his presidency, and I think we showed to the satisfaction of the country that that was done when the country first started. It was done in the Belknap decision after the Civil War, and there's no problem with it, and yet, they decided to hang their hat on that very dubious hook in order to basically cater to Trump and the forces within the party that are still loyal to him in a really cultish and dangerous way,” he said.

“It was the largest impeachment conviction vote in U.S. history. It was by far the most bipartisan majority that's ever assembled in the Senate to convict a president, which has traditionally been a kind of partisan thing in American history, but we got seven Republicans, and if you look at the 10 Republicans in the House who joined us, it was by far the most bipartisan decision and a complete repudiation of the president's conduct,” he said.

“Now, unfortunately, it didn't reach the two-thirds majority in the Senate. We're explaining this to foreign journalists who can't understand why he wasn't convicted with a 57 to 43 vote, a 14-vote margin. Well, you need two-thirds, but I think that we successfully prosecuted him and convicted him in the court of public opinion and in the court of history. He's obviously a major political problem for the Republican Party, and as long as he's out there attempting to wage war on American constitutional democracy, he's a problem for all of us,” the congressman said.

Asked whether it would have made a difference if House Democrats had waited an extra week or two to allow more time to investigate, Raskin said, “Well, actually we did take an extra two weeks. It was supposed to start before that. Nobody said to us, nobody on any side, that we didn't make our case. It was absolutely overwhelming and meticulous and comprehensive.

“I don't think anybody can watch that without coming away saying, ‘Donald Trump incited that violent insurrection.’ He named the date of the rally, he named the time of the rally. It was timed with the counting the Electoral College votes. He said, ‘Stop the steal,’ and then he basically, you know, fired the cannon of the rally-goers that he had gathered right at the Capitol,” the congressman said.

“So, look, when you listen to what McConnell said or what Senator Capito from West Virginia's saying, they're saying, ‘Look, the facts were there.’ They're not disputing that. They're just saying, ‘We don't think that we can prosecute a former president.’ They would have found some way -- you can always slice the bologna real fine to come up with some way to acquit somebody if that's what you want to do,” he said.

“And in fact, that was the whole strategy of our opposition council. They were saying, ‘Well, you can pick due process. You can pick First Amendment. Pick whatever you want. Just pick one reason to let him go,’” Raskin said.