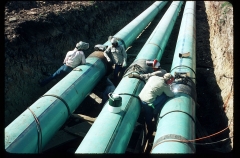 (CNSNews.com) - The White House said it is frustrating that gas prices have not fallen despite the drop in oil prices upon news of the Omicron variant and despite President Biden’s decision to tap the Strategic Petroleum Reserve.

The president announced last week that Energy Department will release 50 million barrels of oil from the Strategic Petroleum Reserve, the largest release in U.S. history.

During a gaggle onboard Air Force One en route to Minnesota, White House Press Secretary Jen Psaki said the administration is not considering scaling back on that amount of oil release from Strategic Petroleum Reserve.

“When you released the oil---announced the release of the oil from the Strategic Petroleum Reserve, it didn’t have as much impact as did this news about the new variant, which has really pushed crude prices down. Is there any thinking about going back and perhaps not doing as large of a relief, not doing as many gallons out of the SPR,” a reporter asked.

PSAKI: I’m not aware of that being under consideration. I would also note that because there had been discussions and reports of discussions for some time that we had seen a 10 percent decrease in the price of oil that was kind of baked into the system in advance of that in anticipation, but I’m not aware of any plans to change that.

REPORTER: Are you frustrated about the lack of impact of those lower crude prices and prices at the gas pump? What else can you do? You’ve gone to the FTC. You’ve spoken about this publicly. What other levers do you have? And some people say if you really want to tackle inflation, maybe one step would be to reduce tariffs that have an inflationary impact for American consumers. Is there any discussion to look at that, to look at other choices now just to sort of get a grip on this 31-year-high inflation?

It doesn’t take an oil market expert to recognize that that doesn’t sound, look or smell right, and that’s why the president asked the FTC - an independent agency to take a look at this, because it shouldn’t be that gas gouging is something that we have concern about happening out there in the country, and we see oil company CEOs bragging about the profits they make when gas prices go up.

This is a real impact on the American people. It is incredibly frustrating. That’s why the president is so focused on it. I would note on your question on inflation, the way the president thinks about this is people’s budgets at home, when they’re doing their budget, their budget for how they’re paying for life whether it’s groceries or putting their kids to school or sending their kids to school or gas prices.

How do these cost increases impact them? So the way he looks at it is, let’s use every lever we can, which he is working to do and will continue to look for options, but also that’s why he’s very focused on getting Build Back Better Done as quickly as possible, because that will cut costs for people as soon as next year.

Remember the child tax credit is going to expire in mid-January. Remember that this will help cut child care costs next year. It will help build affordable housing units next year, and this is a way that we can cut costs for working families.