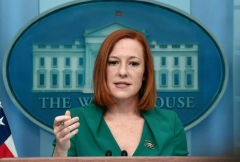 White House Press Secretary Jen Psaki speaks at a press briefing in the Brady Briefing Room of the White House in Washington, DC, on March 17, 2022. (Photo by NICHOLAS KAMM/AFP via Getty Images)

Psaki responded by saying that the White House has spoken about Florida’s Parental Rights in Education bill, dubbed the “Don’t Say Gay” bill by liberals, in the past and characterized it as “hateful.”

The Parental Rights in Education bill “prohibits classroom instruction on sexual orientation or gender identity in kindergarten through grade 3 or in a manner that is not age-appropriate or developmentally appropriate for students.”

It does not prohibit such instruction to students above the 3rd grade.

“The bill reinforces a parent’s fundamental right to make decisions regarding the care and upbringing of his or her child in the public school setting. The bill requires each district school board to adopt procedures for notifying a student’s parent if there is a change in services or monitoring related to the student’s mental, emotional, or physical health or well-being. All procedures adopted under the bill must require school district personnel to encourage a student to discuss issues related to his or her well-being with his or her parent,” the bill’s summary states.

“At the beginning of each school year, a school district must notify parents of all healthcare services offered at their student’s school and provide parents the opportunity to individually consent to, or decline, each service. Additionally, schools may not administer a well-being questionnaire or health screening form to a student in kindergarten through grade 3 without first receiving consent from the student’s parent.

“What about this new law in Florida? At what age does the White House think that students should be taught about sexual orientation and gender identity?” Fox News White House Correspondent Peter Doocy asked.

PSAKI: Well, I would say, first of all, Peter, we have spoken to the “Don’t Say Gay” bill in the past — I believe is what you’re referring to and made clear that as we look at this — this law, what we think it’s a reflection of is politicians in Florida propagating misinformed, hateful policies that do absolutely nothing to address the real issues.

The Department of Education is well positioned and ready to evaluate what to do next, and when — and its implementation — whether its implementation violates federal civil rights law, but I would note that parents across the country are looking to, you know, national, state, and district leaders to support our nation’s students, to ensure that kids are treated equally in schools, and that is certainly not — this is not a reflection of that.

PSAKI: Do you have examples of schools in Florida that are teaching kindergarteners about sex education?

DOOCY: I’m just asking for the president’s opinion about this law.