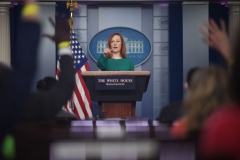 White House Press Secretary Jen Psaki answers questions as she speaks during the daily press briefing on March 15, 2021, in the Brady Briefing Room of the White House in Washington, DC. (Photo by ERIC BARADAT/AFP via Getty Images)

(CNSNews.com) - White House Press Secretary Jen Psaki said Monday that the White House has not asked Facebook to block any individual posts on vaccine misinformation, but is concerned about “trends” of misinformation circulating on social media.

Last week at the White House, Surgeon General Vivek Murthy announced that the Biden administration is calling on “technology companies” to “monitor misinformation more closely” and “take action against misinformation super-spreaders on their platforms.”

CNSNews.com asked Psaki on Monday, “Will the White House publicly release information on the posts it considers misinformation on vaccines that it has asked Facebook to block?”

“There’s also data that we look at that many media platforms like many of you also look at data in terms of trends and you report on it, which is to be expected, given the number of people who get their information from social media. It’s up to social media platforms to determine what their application is of their own rules and regulations,” she added.

“So we’ve just certainly raised where we have concerns about information that’s inaccurate that is traveling out there in whatever platform it’s traveling on,” the press secretary added.

When asked on Friday to explain the administration’s request to be more aggressive in policing misinformation, Psaki said that the administration is “in regular touch with these social media platforms, and those engagements typically happen through members of our senior staff, but also members of our COVID-19 team, given, as Dr. Murthy conveyed, this is a big issue of misinformation, specifically on the pandemic.”

“In terms of actions, Alex, that we have taken — or we’re working to take, I should say — from the federal government: We’ve increased disinformation research and tracking within the Surgeon General’s office. We’re flagging problematic posts for Facebook that spread disinformation,” she said.

"We also created the COVID-19 — the COVID Community Corps to get factual information into the hands of local messengers, and we’re also investing, as you all have seen in the President’s, the Vice President’s, and Dr. Fauci’s time in meeting with influencers who also have large reaches to a lot of these target audiences who can spread and share accurate information.

"You saw an example of that yesterday. I believe that video will be out Fri- — tomorrow. I think that was your question, Steve, yesterday; I did a full follow-up there.

"There are also proposed changes that we have made to social media platforms, including Facebook, and those specifically are four key steps.

"That will help us ensure we’re getting accurate information to people. This should be provided not just to researchers, but to the public so that the public knows and understands what is accurate and inaccurate.

"Second, that we have recommended — proposed that they create a robust enforcement strategy that bridges their properties and provides transparency about the rules. So, about — I think this was a question asked before — there’s about 12 people who are producing 65 percent of anti-vaccine misinformation on social media platforms. All of them remain active on Facebook, despite some even being banned on other platforms, including Facebook — ones that Facebook owns.

"Third, it’s important to take faster action against harmful posts. As you all know, information travels quite quickly on social media platforms; sometimes it’s not accurate. And Facebook needs to move more quickly to remove harmful, violative posts — posts that will be within their policies for removal often remain up for days. That’s too long. The information spreads too quickly.

"So, these are certainly the proposals. We engage with them regularly and they certainly understand what our asks are."