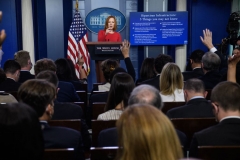 White House Press Secretary Jen Psaki speaks during the daily press briefing on October 19, 2021, in the Brady Briefing Room of the White House in Washington, DC. (Photo by NICHOLAS KAMM/AFP via Getty Images)

(CNSNews.com) - White House Press Secretary Jen Psaki said Tuesday that COVID-19 was the number one cause of death among police officers last year, and the Biden administration supports efforts by police departments to combat it through vaccine mandates.

The Washington Post reported that some police unions and officers are filing lawsuits to block vaccine mandates. In Chicago, police officers were ordered to report their vaccination status by Friday, but the head of the police union urged them not to comply. Chicago Mayor Lori Lightfoot said she would put officers who don’t comply on unpaid leave.

PSAKI: Where are tons of police and military walking off the job?

DOOCY: The Washington Post says that hundreds of thousands of U.S. servicemembers remain unvaccinated, which is leading to questions about possible military readiness. The L.A. County sheriff says that five to 10 percent of their workforce could walk off the job, and so considering the-- is there any concern about that?

DOOCY: In certain branches, but there are other problems in the world than COVID-19 - international terror, gang violence, murder, arson, drug dealing. Is there any concern about any of these things?

PSAKI: What was the number one cause of death among police officers last year? Do you know? COVID-19. So that’s something that we’re working to address, and police departments are working to address. If you look at Seattle, as an example, which I know has been in some of the reporting, 92 percent of the police force is vaccinated as are 93 percent of firefighters; 99 percent of Seattle’s 11,000 employees have submitted vaccine verification or an exemption request.

DOOCY: My question is public safety though - all these other problems: terror, murder, robberies, kidnappings. Is there any concern that if police forces shrink or if the size of the ready military force shrinks that the United States or localities may not be equipped properly to deal with them or to respond?

PSAKI: Peter, more than 700,000 people have died of COVID. Again, it was the number one cause of death among police departments and police officers. It’s something that we should take seriously. Departments are trying to save people in their departments, people who work for them. We support that effort, and there’s been success across the country in that regard.