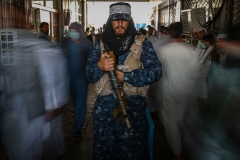 A Taliban fighter stands guard as people move past him at a market with shops dealing with currency exchange in Kabul on September 5, 2021. (Photo by AAMIR QURESHI/AFP via Getty Images)

(CNSNews.com) - White House Press Secretary Jen Psaki said Wednesday that the Biden administration is not “rushing” to recognize the Taliban and that there’s a lot they have to do before then.

Fox News White House Correspondent Peter Doocy asked Psaki, “There are now more terrorists wanted by the FBI in the new Afghan government than there are women. Does the president think that is a foreign policy success?”

PSAKI: Well, first of all, no one in this administration — not the president nor anyone on the national security team — would suggest that the Taliban are respected and valued members of the global community. They have not earned that in any way, and we’re not — we have never assessed that.

This is a caretaker cabinet that does include four former imprisoned Taliban fighters. We have not validated that.  We have not conveyed we’re going to recognize it. What we’re working to do — and nor are we rushing to recognition; there’s a lot they have to do before that.

DOOCY: But to engage with them — their new acting interior minister is a Haqqani Network terrorist. He’s wanted for a bombing that killed six people, including an American. He’s believed to have participated in cross-border attacks against U.S. troops. There’s a $10 million bounty on his head. Why are we engaging with the government —

PSAKI: Should we not — should we not talk to the people who are overseeing Afghanistan and just leave it and not get the rest of the American citizens out?

PSAKI: Waiting for what?

DOOCY: You’re saying that we’re not going to rush to recognition. That means that there could be recognition.

PSAKI: As we’ve said many times, the international community is watching, the United States is watching. It’s whether they let people depart the country who want to depart; whether they treat women across the country as they have committed to treat them —

DOOCY: And we’ve seen they’re not doing that.

PSAKI:  — and how they behave and operate, and therefore, we’re not moving toward recognition. At the same time, we’re dealing with a reality world here where we have to engage in order to get American citizens and others out of the country.

As CNSNews.com previously reported, the Taliban on Tuesday announced an “acting” government and cabinet including wanted and sanctioned terrorists, suspected mass murderers of ethnic and religious minorities – and no women.

The man named as “acting” interior minister, Sirajuddin Haqqani, leads the Haqqani Network, a U.S.-designated foreign terrorist organization. The U.S. Treasury Department named him a specially designated global terrorist in 2011, he’s wanted by the FBI, and the State Department is offering a reward of up to $10 million for information that brings him to justice.

DOOCY: Following up on these charter flights that the Taliban is holding up in Afghanistan. the secretary of state said there are limits to what we can do without personnel on the ground.

DOOCY: You just said we are not on the ground.

DOOCY:  Whose fault is that?

PSAKI: I don’t think this is about fault here. I’m conveying — I think what people want to understand is what we’re doing to help address it. There’s a handful of Americans — and I’m sure you’re not suggesting we should have flights with hundreds of people we don’t know who they are —

DOOCY: Okay, how many Americans —

PSAKI:  — and there’s no security protocols —

PSAKI: Too few? I just am conveying to you —

PSAKI:  — there’s a handful of Americans who we are also in touch with and we are working to help get evacuated from Afghanistan, but decisions you have to make in the federal government are not ‘yes and no’ decisions or as simple as what you’re laying out here.

What we’re evaluating and looking at is how to keep people on our military bases safe while also getting these U.S. citizens, dual citizens, people who are prepared to leave Afghanistan, able to leave.

At the same time, we don’t think it ha- — we’re not going to allow flights that have hundreds of people who we don’t know who they are, who haven’t been security protocol — through security protocols, where we haven’t seen the manifest, to land on U.S. military bases.