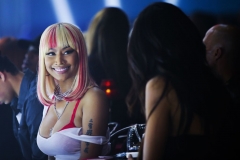 (CNSNews.com) - White House Press Secretary Jen Psaki is denying that they invited rapper Nikki Minaj to the White House to discuss her concerns about COVID vaccinations.

Minaj urged people to “pray on it” before getting vaccinated and not be bullied.

"My cousin in Trinidad won’t get the vaccine cuz his friend got it & became impotent. His testicles became swollen. His friend was weeks away from getting married, now the girl called off the wedding. So just pray on it & make sure you’re comfortable with ur decision, not bullied,” she tweeted on Monday.

As a result of the controversy, Minaj said that she was invited to the White House, which she called “a step in the right direction” and indicated that she was going.”

“The White House has invited me & I think it’s a step in the right direction. Yes, I’m going. I’ll be dressed in all pink like Legally Blonde so they know I mean business. I’ll ask questions on behalf of the ppl who have been made fun of for simply being human. #BallGate day 3,” she tweeted.

The White House, however, denied that they invited Minaj for a visit.

“I want to ask you about some recent vaccine misinformation that’s been out there, and ask you to clarify. There seems to be a difference of opinion between Nicki Minaj and the White House about what she was invited to do. Did the White House extend an invitation to Nicki Minaj to come here?” CBS News White House Correspondent Nancy Cordes asked Thursday.

PSAKI: Well, first, we don’t see this as a point of tension or disagreement. I want you all to know that we engage all the time with people who have big public platforms or profiles. Some of them we talk about. Some of them are here. Some of them you don’t even know about because they’re just looking for questions to be answered.

We offered a call with Nicki Minaj and one of our doctors to answer questions she had about the safety and effectiveness of the vaccine. This is pretty standard and something we do all the time.

CORDES: And do you think that’s going to happen?

PSAKI: We’ll see. I don’t have anything to predict for you.

CORDES: What kind of responsibility do you think someone like Nicki Minaj has — someone with a really big platform — when it comes to talking about the vaccine?

At the same time — and both can be true — we also recognize that people have questions out there. They have questions they want to have answered by their doctors. We have doctors who can answer questions, and this is something — again, in our outreach to celebrities — it follows a pretty standard process.

We — officials who are working on these issues engage in regular conversations, offer to answer questions — offer to do that privately sometimes, sometimes it’s done publicly, and I would say that if we believed that everybody who had skepticism about the vaccine wasn’t someone we should engage with or talk to, we wouldn’t have made the progress we’ve made.

I mean, remember, back in December, the — only 33 percent of the American people were open to getting vaccinated.

Now, more than 75 percent have had at least one shot. So, part of our strategy and our objective from the beginning has been engaging with people who have questions to help answer their questions.

Another reporter asked Psaki why the White House doesn’t consider inviting Minaj, considering that she has a substantial following on Twitter.

The White House had previously invited singer Olivia Rodrigo for a visit to promote vaccination. The singer even did a video with Dr. Anthony Fauci, director of the National Institute for Allergy and Infectious Diseases.

REPORTER: And Nicki Minaj has 22 million Twitter followers. Why not invite her to the White House, have a conversation, and make it a big public thing?

PSAKI: Well, I appreciate your recommendations on our communications advice, Karen. You are quite experienced.

Look, I will say, we recognize — and we’ve talked about this a bunch before — that we are not always the right platform or the right voice. Right? Sometimes that’s because people may not like the president and they may not have voted for him, and that’s okay, and we work with a range of partners to communicate the efficacy and the safety of the vaccine.

It’s also true that when we’re reaching a range of audiences — young people, where we’ve seen lower rates of vaccination, is a good example — we know there might be more effective voices. We don’t always know how effective working in partnership with celebrities may or may not be, but sometimes it is a tool that we can use or we’ve employed, as you’ve seen us do in — on cases before.

We do this behind the scenes quite a bit, sometimes to speak to particular audiences. So, all I was conveying is it’s commonplace. We have calls every week, multiple times a week from our engagement team with a range of officials with followings to see how they might want questions answered, maybe they want to play a role in communicating information out publicly as a part of our effort to — to get the pandemic under control.

PSAKI: It’s a good question. It’s kind of a hard thing to track. We can see how many views. We can see, anecdotally, if people say, “I got the vaccine because I saw this video,” and, certainly, sometimes that happens. I’m not sure. I’ll have to check.