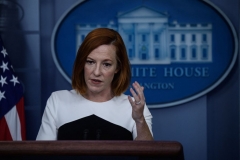 (CNSNews.com) - White House Press Secretary Jen Psaki said Monday that the Biden administration is begrudgingly reinstating the Remain in Mexico Program, also known as the Migrant Protection Protocol, because of a court order requiring them to do so.

The administration still feels the program is “inefficient” and “inhumane,” the press secretary said.

That being said, Psaki said the administration is “injecting additional humanitarian considerations” into MPP.

“Immigrant rights advocates say that the idea that the United States government is going to be able to facilitate lawyers for migrants who want them is an empty promise. What can you say to assure those people that, in fact, you’ll live by that commitment?” CBS News Radio White House Correspondent Steven Portnoy asked.

“Well, I would say first to all of these people that it is not our preference to be reimplementing and reinstituting the Migrant Protection program,” Psaki said.

“We are doing that because of a court order and legal requirement to do so, and that we have put in place a number of changes to make — from the Department of Homeland Security — to improve some humanitarian components, but we still feel that the program is inefficient, inhumane, and we are not — we weren’t — we were — did not eagerly reimplement it, I should say,” the press secretary said.

“But in terms of people who are skeptics, we are absolutely committed to doing everything we can, as we are required by court order, to implement this, to take steps to ensure that there are — that we are injecting additional humanitarian considerations and providing the assistance that we have promised to people who are participating in the program,” she added.