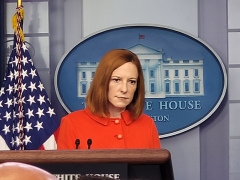 (CNSNews.com) - White House Press Secretary Jen Psaki said Wednesday that there is always an investigation when a drone strike “could have impacted innocent civilians,” which is why the Biden administration is investigating the drone strikes in Afghanistan last month that targeted ISIS-K terrorists.

“How much confidence does the president have that the drone strikes in Afghanistan have killed ISIS militants?” a reporter asked Psaki.

“How much confidence in which aspect of it?” Psaki asked.

“How much confidence does he have that the drone strikes killed the targets that were intended to be ISIS fighters, as opposed to innocent victims on the street? And does he take responsibility if the innocent victims were killed?” the reporter asked.

“Well, first, there is an investigation that’s ongoing, as there always is in any event of drone strikes that could have impacted innocent civilians, and the United States takes incredibly seriously our role in preventing civilian casualties whenever we possibly can. So, I’m going to let that play out,” Psaki said.

“The president also takes that responsibility incredibly seriously. We’ll let that conclude, and then I’m sure we’ll have more to say,” she said.

“But he doesn’t know the answer, I guess, right?” the reporter asked.

“Well, but that’s why there’s an investigation: to determine what happened and make some conclusions,” Psaki said.

As CNSNews.com reported, Secretary of State Antony Blinken admitted that the Biden administration is reviewing whether the drone strikes in Afghanistan last month actually killed an ISIS-K terrorist or an aide worker.