Psaki: ‘There Are 9,000 Approved Oil Leases That Oil Companies Are Not Tapping into Currently’ 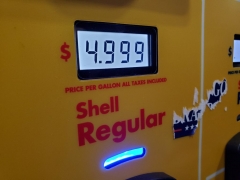 (CNSNews.com) - President Biden called for fighting inflation by making more goods in the United States in his State of the Union address on Tuesday, but the Biden administration doesn’t hold the same view when it comes to rising gas prices.

Fox News White House Correspondent Jacqui Heinrich asked Thursday, “On gas, you just said that, you know, ‘less supply raises prices,’ it’s not in our strategic interest to reduce the supply. We also know, you know, the President, as recently as yesterday, talked about increasing domestic manufacturing to bring down prices on inflated items like goods.  So why not apply the same logic to energy and increase domestic production here?”

“Well, there are 9,000 approved oil leases that the oil companies are not tapping into currently.  So I would ask them that question,” White House Press Secretary Jen Psaki said.

HEINRICH: Is there nothing that the administration can do to get those providers back to pre-pandemic levels?

PSAKI:  Do you think the oil companies don’t have enough money to drill on the places that have been pre-approved?

PSAKI:  I would — I would point that question to them. And we can talk about it more tomorrow when you learn more.

HEINRICH: Do you think that opening the Keystone Pipeline and having more energy-friendly policies might do that?

PSAKI: The Keystone Pipeline has never been operational.  It would take years for that to have any impact.  I know a number of members of Congress have suggested that, but that is a proposed solution that has no relationship or would have no impact on what the problem is we, here, all agree is an issue.

HEINRICH: So during that — those years where it would, you know, take to bring down prices, as you’re saying, we should just continue to buy Russian oil?

PSAKI:  Well, again, Jacqui, I think you’re familiar with a number of steps we’ve taken: a historic release from the Strategic Petroleum Reserve.

HEINRICH: But that didn’t bring down prices — last time or this time.

PSAKI:  Well, we can — well, let me finish.  What we can do over time and what this is a rema- — reminder of, in the President’s view, is our need to reduce our reliance on oil.

HEINRICH: As long as we’re buying Russian oil, though, aren’t we financing the war?

PSAKI: Well, Jacqui, again, it’s only about 10 percent of what we’re importing. I’ve not made any announcement about any decision on that front, but our objective here and our focus is making sure that any step we take maximizes the impact on President Putin and minimizes it on the American people, and anyone who’s calling for an end to the carveout should be clear that that would rise — raise prices.