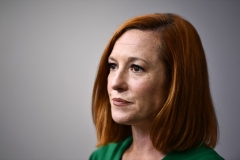 White House Press Secretary Jen Psaki speaks during the daily press briefing in the Brady Briefing Room of the White House in Washington, DC on September 29, 2021. (Photo by BRENDAN SMIALOWSKI/AFP via Getty Images)

(CNSNews.com) - The White House on Wednesday denied that Sen. Bernie Sanders (I-Vt.) threw a “monkey wrench” in the plans for Democrats to pass a bipartisan infrastructure bill by encouraging his progressive colleagues to vote against it until Congress “passes a strong reconciliation bill.”

“I strongly urge my House colleagues to vote against the bipartisan infrastructure bill until Congress passes a strong reconciliation bill,” Sanders tweeted on Tuesday.

“Let’s be crystal clear. If the bipartisan infrastructure bill is passed on its own on Thursday, this will be in violation of an agreement that was reached within the Democratic Caucus in Congress,” he tweeted.

When asked about it Wednesday, White House Press Secretary Jen Psaki said, “there are no monkey wrenches here - none.”

REPORTER: To follow up on it, it seems like Bernie Sanders has thrown a monkey wrench into all this by encouraging —

PSAKI: There are no monkey wrenches here. None.

REPORTER: — by encouraging his progressive colleagues in the House to vote down the bipartisan package, infrastructure package, unless the reconciliation package passes first, and I know President Biden has worked closely with Senator Sanders. What happened here, and how much damage has it done?

PSAKI: Well, we’re in the middle of it here, Terry. We’re not done with this. The president has been clear about his commitment to getting both pieces of legislation passed — both of them through.

So, right now, what we’re navigating through and we’re working through is how we can get agreement, of course — 50 votes in the Senate on a reconciliation package. That’s what we’re discussing here. We have to see what senators are comfortable with and if everybody involved is comfortable with it to get enough votes to get it across the finish line.

REPORTER: But right now, Senator Sanders is telling his progressive colleagues, “Vote it down.  Vote down the bipartisan infrastructure package.  Kill the whole thing.”

PSAKI:  Well, I’m not going to speak for Senator Sanders, but I would say — I would say that there’s more context of what a number of members of the Progressive Caucus are saying.  What they want is they want a number, they want to understand what the path forward is on the reconciliation package, and, ultimately, our objective here is to work towards unity, work towards an agreement. That’s in process  We’re not there yet, but we’re working on it.

REPORTER: On the other end of the ideological spectrum in the Democratic Party, Senator Manchin has said that he doesn’t think the tax incentives and subsidies for renewables are needed right now, that they’re not necessary right now. Can the White House commit to keep those?

REPORTER: So that’s a no? No commitment on those issues?

PSAKI: I’m not negotiating from here. I could otherwise say, “This is in, this is out.” We’re not going to do that from here. We’re obviously at a precarious — an important time in these discussions.