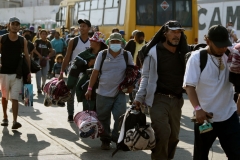 Migrants heading in a caravan towards the US wait for buses at the "House of the Pilgrim San Juan Diego" in Mexico City, on December 22, 2021. (Photo by ALFREDO ESTRELLA/AFP via Getty Images)

(CNSNews.com) – White House Press Secretary Jen Psaki said Tuesday that migrants who cannot be expelled under Title 42 are released into the U.S. and placed into immigration proceedings as an alternative to detention programs.

This comes as Fox News reported seeing large numbers of illegal immigrant men being dropped off at a parking garage in Brownsville, Texas, where black tarps were set up with a makeshift sign saying, “Border Patrol drop-off.”

Fox News White House Correspondent Peter Doocy asked Psaki about it, saying, “Why is it that large numbers of single adult men are being released into the United States just hours after being apprehended at the southern border?”

“I’m not sure the specifics of what you’re referring to Peter. What I can tell you in terms of what our policy is and how we’re approaching the border is that we continue to be under Title 42. Migrants who cannot be expelled under Title 42 are placed into immigration proceedings, and one of those avenues could be placement in an alternative to detention program in the interior of the United States,” Psaki said.

“Sometimes that means moving migrants to other parts of the United States to move to different detention facilities where they wait for next steps in the immigration process such as a court hearing and are required to check in with a local ICE office, so that is something that is happening out there in the country and is consistent with our policy,” she said.

“You mentioned they’re supposed to check in at a local ICE office, but we know just between March and August, which is a very small sample size, DHS says one of 47,000 of these migrants that were given notices to report did not show up. So why let them into the U.S. unsupervised in the first place?” Doocy asked.

“Well, again. We have a stringent protocols and processes that we implement here. That includes expelling individuals who come in under title 42, given we are still in a global pandemic and includes those who do not show up will be subject to the repercussions of that so that is the policy we're implementing from our Homeland Security Department,” Psaki said.