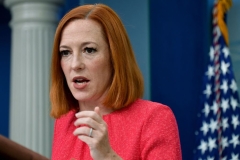 White House Press Secretary Jen Psaki speaks during a daily briefing in the James S Brady Press Briefing Room of the White House in Washington, DC, on May 2, 2022. (Photo by NICHOLAS KAMM/AFP via Getty Images)

(CNSNews.com) - White House Press Secretary Jen Psaki on Thursday refused to condemn pro-abortion activists who are planning to protest outside the homes of U.S. Supreme Court justices, saying that “peaceful protest is not extreme.”

“So, you guys had some time yesterday talking about what you think are the extreme wings of the Republican Party. Do you think the progressive activists that are now planning protests outside some of the justices’ houses are extreme?” Fox News White House Correspondent Peter Doocy asked.

DOOCY: But some of these justices have young kids. Their neighbors are not all public figures. So would the president think about waving off activists that want to go into residential neighborhoods in Virginia and Maryland?

PSAKI:  Peter, look, I think our view here is that peaceful protest — there’s a long history in the United States and the country of that, and we certainly encourage people to keep it peaceful and not resort to any level of violence. Let me tell you what I was referring to and what the president was referring to yesterday.

DOOCY: Not about yesterday, though — just about moving forward. These activists posted a map with the home addresses of the Supreme Court justices. Is that the kind of thing this President wants to help your side make their point?

PSAKI: Look, I think the president's view is that there’s a lot of passion, a lot of fear, a lot of sadness from many, many people across this country about what they saw in that leaked document. We obviously want people’s privacy to be respected. We want people to protest peacefully if they want to — to protest. That is certainly what the president’s view would be.

DOOCY: So he doesn’t care if they’re protesting outside the Supreme Court or outside someone’s private residence?

PSAKI:  I don’t have an official U.S. government position on where people protest. I want it — we want it, of course, to be peaceful, and certainly, the president would want people’s privacy to be respected, but I think we shouldn’t lose the point here.