Psaki: ‘Not Accurate’ That Administration Is Cutting Monoclonal Antibodies to Red States 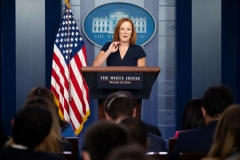 White House Press Secretary Jen Psaki speaks during the daily press briefing on August 24, 2021, in the Brady Briefing Room of the White House in Washington, DC. (Photo by JIM WATSON/AFP via Getty Images)

(CNSNews.com) - White House Press Secretary Jen Psaki said Thursday that reports that the Biden administration is cutting supplies of monoclonal antibodies to states are  “not accurate.”

Newsmax White House Correspondent Emerald Robinson asked Psaki, “So speaking of the waning efficacy of vaccines, I do have another question about the President’s COVID plan. He promised on September 9th that he was going to send 50 percent more supply of monoclonal antibodies to states, yet the Biden administration is cutting supplies in red states by 50 percent.

“So, for example, you know, in Florida, they were expecting to get 70,000 doses this week, which they say they need. They’re only getting 30,000 doses, and this is not just for unvaccinated people. In South Florida, half the people who are seeking this treatment are fully vaccinated. So why is the Biden administration cutting these supplies?” she asked.

Over the last month, though — and one thing that I think people need to understand for clarity — facts — I know you like facts — is that monoclonal antibodies are lifesaving therapies that are used after infection to prevent more severe outcomes.

So, clearly, the way to protect people and save more lives is to get them vaccinated so that they don’t get the — COVID to begin with, but over the last month, given the rise in cases due to the Delta variant and the lower number of vaccination rates in some of these states — like Florida, like Texas — just seven states are making up 70 percent of the orders. Our supply is not unlimited, and we believe it should be equitable —

ROBINSON: But there has —

PSAKI:  — across states across the country. Do you —

PSAKI: I think our role as the — as the government overseeing the entire country is to be equitable in how we distribute. We’re not going to give a greater percentage to Florida over Oklahoma, nor do I think are you suggesting that.

South Carolina health officials said that they are forced to ration doses of monoclonal antibodies because of a national shortage.

The South Carolina Department of Health and Environmental Control said it has been informed by the federal government about a national shortage of the antibodies and as a result the state will only get about 4,460 doses this week --- not the 13,000 ordered by providers in the state,” WSOC-TV reported Friday.

A senior HHS official told Forbes that the Department of Health and Human Services (HHS) is starting to allocate treatments to states based on case levels and usage of the treatments according to a policy introduced Monday.

“This marks a shift from the agency’s distribution strategy over the past few months which allowed states to freely order supplies, and reverts back to how the HHS distributed the drugs between November 2020 and February 2021, before they were widely available,” Forbes reported Wednesday.