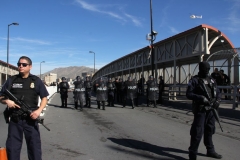 US customs and border patrol agents and riot policemen take part in a border security drill at the US-Mexico international bridge, as seen from Ciudad Juarez, Mexico, on October 29, 2018. (Photo by HERIKA MARTINEZ/AFP via Getty Images)

(CNSNews.com) - White House Press Secretary Jen Psaki denied Friday that there was ever “a formal declaration or a formal agreement” for Northern Triangle countries - Mexico, Guatemala, and Honduras - to maintain a troop presence at the border.

This after the Special Envoy for the Northern Triangle Ricardo Zúniga on Wednesday denied that there were any agreements for those countries to provide security at the border.

“Earlier this week, you said the U.S. had secured commitments with the governments of Mexico, Guatemala and Honduras to bolster security forces at their border, but yesterday, the special envoy for the Northern Triangle testified on Capitol Hill that there were no agreements, so can you explain the discrepancy?” Fox News Correspondent Kristin Fisher asked.

PSAKI: I’d have to look back at his testimony, Kristin.

FISHER: I have it right here. … Congressman Castro asked him, ‘I just want to confirm. Were there any agreements reached in relation to increasing border security in these countries, and the special envoy said, there were no agreements concluded with governments regarding border security.

PSAKI: Well whether it was a formal agreement, which it was not, and I never conveyed that it was, these were steps that these countries indicated they planned to take to increase personnel and security to reduce the number of migrants coming across the border. Those are steps they’ve taken on the ground.

FISHER: Just to be clear, are these commitments that the Biden administration has secured or were they already in existence?

PSAKI: We never described it as a formal declaration or a formal agreement, but additional steps that they were taking to increase personnel at the border, and those are steps that you can confirm with those countries that they have taken.