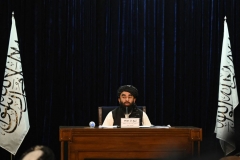 Taliban spokesman Zabihullah Mujahid addresses a press conference in Kabul on September 7, 2021. The Taliban on September 7 announced UN-sanctioned Taliban veteran Mullah Mohammad Hassan Akhund as the leader of their new government, while giving key positions to some of the movement's top officials. (Photo by AAMIR QURESHI/AFP via Getty Images)

(CNSNews.com) – White House Press Secretary Jen Psaki said Tuesday that the United States is in “no rush” to recognize the Taliban as the official government of Afghanistan.

During a gaggle on board Air Force One en route to New Jersey, the press secretary was asked, “The president said that when asked if Washington will recognize the Taliban, he said, that is a long way off, and I’m wondering what that really means in terms of a timeline. Is there anything you can share with us on a timeline?”

“As the president said, I think it was yesterday, there’s no rush to recognition. It is really going to be dependent on what steps the Taliban takes. The world will be watching, the United States included,” the press secretary said.

The press secretary said that as of now there are just under 100 Americans still in Afghanistan. She also noted that four Americans made it out of Afghanistan “over land.”

“As you may have seen out there reported over the weekend, there were four American citizens who were able to depart over land. That’s one of the ways that we are working with American citizens to get out of the country, and obviously, our secretary of state is on the ground in Qatar I think still as of this moment and getting Qatar Airlines up and operational as part of our objective as well,” she said.

As CNSNews.com reported, four Americans – a mother and three children – made if across a land border to safety in an unspecified neighboring country thanks to a military veteran – Cory Mills, a Republican candidate for a Florida congressional seat in the 2022 midterms.

Rep. Ronny Jackson (R-Texas), who has been centrally involved in the two-week bid to rescue the four family members from his congressional district, described it as “the first successful ground evacuation since the U.S. left Kabul.”

“Secretary Blinken spoke to this a little bit this morning, but can you offer further clarity on who’s stuck on these planes? Who are the people and who is actually blocking them? Is it the Taliban that’s keeping—I know there’s some issues with documents, but who are these people that are stuck? Are they Americans?” a reporter asked the press secretary.

“Well again, we’re working to get every single American citizen and any individual who has documentation out of the country, and I think our secretary of state spoke to this on the ground in Qatar where he conveyed that he has not received reports – I’m paraphrasing him, so should quote him directly – that individuals who have documentation have been stopped,” Psaki said.

“I would also note that some of these charter flights, and I talked about this a little bit, we don’t have an assessment of the manifest on the ground, right? So we don’t—while we are in touch with American citizens directly, beyond that, we don’t have an assessment of manifests, what security protocol measures are taken, so there are a range of issues that we’re working through,” she said.