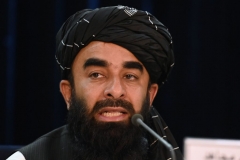 (CNSNews.com) – White House Press Secretary Jen Psaki told reporters on Thursday that part of the economic leverage that the U.S. has over the Taliban is the limited easing of the freeze in Afghan assets to prevent the collapse of the country’s banking sector.

However, she said that “no one should assess” that the U.S. is currently considering an easing of sanctions on the Taliban.

“That is not under — that is not actively being discussed or pursued,” the press secretary said.

“We have not reduced sanctions pressure on the Taliban leaders or the significant restrictions on their access to the international financial system, and we will judge — and we want to make clear — this very clear: We are going to judge the Taliban by their actions, and we will stay in close coordination with the international community on any steps that we take moving forward,” she said.

“Now, at the same time, we also want to ensure there is assistance to the Afghan people — humanitarian assistance and other assistance — to keep them afloat and make sure they have — we provide that from the international community at this point in time,” Psaki said.

“So there have been steps that have been taken in coordin- — including issuing an OFAC license that allows this humanitarian assistance to go through. That, of course, is not through the Taliban; that is through outside organizations, and that’s something we’re working to be big contributors to,” the press secretary said.