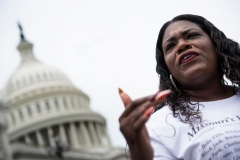 Rep. Cori Bush (D-MO) speaks to the press as people continue to gather on Capitol Hill to protest the end of the eviction moratorium on August 3, 2021, in Washington, DC. (Photo by BRENDAN SMIALOWSKI/AFP via Getty Images)

Psaki said she finds it “disturbing that any elected official would have to suffer death threats and fear for their life,” after Bush said that her life has been threatened by police officers.

As CNSNews.com reported, Bush said she still wants to defund the police and she has private security, because police officers are among those who are threatening her life.

“Defunding the police and being able to have security – because those same folks are causing it – it’s two totally different things,” Bush told CBS News. “And, this is my last point on this: if I have actual police officers who have threatened my life, tell me about this, tell me that I don’t need security.”

Fox News White House Correspondent Peter Doocy asked Psaki, “Democratic Congresswoman Cori Bush is saying that she favors spending tens of thousands on private security to keep her safe, and that people should, ‘Suck it up…defunding the police has to happen.’ Didn’t President Biden say a few weeks ago that anybody who accuses the party of being anti-police is lying?”

PSAKI: Well, I think we shouldn’t lose the forest through the trees here, which is that a member of Congress, an elected official, is concerned that her life is threatened, and that’s disturbing that any elected official would have to suffer death threats and fear for their life. So I’m not going to comment, of course, on their security arrangements. I don’t have any more details on that, but I think we should start with that point first.

I will say that the president has been crystal clear that he opposes defunding the police.  He has said that throughout the campaign — his campaign for office. His record over the last several decades has made that clear. He has proposed increased funding for law enforcement and the COPS program, increased funding from his predecessor — who was, as you might note or be aware of, a Republican. So I’d note that his record is pretty clear on this.

There may be some in the Democratic Party, including Congresswoman Bush, who disagree with him. That’s okay, but I would say the majority of Democrats — we’ve seen this in polling — and the majority of members also agree that we should not defund the police.

PSAKI: It does not appear to become — be becoming a Democratic message, even though there might be a desire for that on the other side of the aisle.