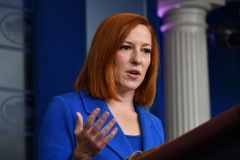 White House Press Secretary Jen Psaki holds a press briefing in the Brady Briefing Room of the White House in Washington, DC on May 10, 2021. (Photo by NICHOLAS KAMM/AFP via Getty Images)

(CNSNews.com) – White House Press Secretary Jen Psaki on Monday blamed the recent spike in violent crime over the past year on the lack of gun control, saying the United States has “a guns problem” and calling for the Senate to pass universal background check legislation.

ABC News White House Correspondent Cecilia Vega asked Psaki, “A look back over the weekend and over the last year. This past weekend, there were more than a dozen mass shooting across this country – 4,000 more people shot and killed by guns in 2020 compared to the year before. Is there a crime problem in this country?”

“I would say certainly there is a guns problem, and that’s something the president would say, and there are communities where local violence and community violence is an issue, and that’s one of the reasons that we have proposed and have now are implementing funding for community violence prevention programs across this country,” Psaki said.

“I will say that we don’t often highlight, and you just gave me the opportunity to the fact that between mass shootings, mass shootings that get a lot of attention that we lower the flags,” the press secretary said.

“There are hundreds, thousands of people who lose their lives, and that’s one of the reasons the president will continue to advocate for the Senate passing universal background checks but also advocate for actions in states where we have seen the greatest level of activism over the past several years,” she said.

“Does COVID have anything to do with the increase in numbers that we’ve seen in the last year?” Vega asked.

“In terms of local community violence? It’s an interesting question. I’d have to ask our team to check on that. I know as I started off this briefing, giving an update on that, we’ve seen statistics on domestic violence,” Psaki said.

“Obviously, we know that there are the loss of life at the hands of gun violence is often, too often suicide, can be domestic violence, and we’ve seen statistics as it relates to the impact on mental health, but I’d have to check with experts on the assessment of that,” the press secretary said.