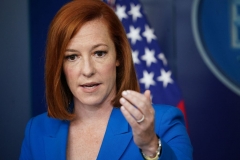 White House Press Secretary Jen Psaki speaks during the daily briefing in the Brady Briefing Room of the White House in Washington, DC on June 7, 2021. (Photo by MANDEL NGAN/AFP via Getty Images)

(CNSNews.com) - White House Press Secretary Jen Psaki acknowledged Thursday that “Communism is a failed ideology” and that the “authoritarian Communist regime has repressed its people and has failed the people of Cuba.”

Fox News White House Correspondent Peter Doocy asked Psaki, “Now that you’ve had a few days to think about it, does this White House still think the protests in Cuba are happening because people are upset about the rise in COVID cases there or is there some thought given to the possibility that they are protesting because they are sick of Communism?”

PSAKI: First, I would say Communism is a failed ideology and we certainly believe that. It has failed the people of Cuba. They deserve freedom. They deserve a government that supports them whether that is making sure they have health and medical supplies, access to vaccines, or whether they have economic opportunity and prosperity, and instead, this has been a government, an authoritarian Communist regime that has repressed its people and has failed the people of Cuba. Hence, we’re seeing that in the streets, but I would note that the ideology of the government, which has failed, has led to a lack of access to economic opportunity, to medical supplies, to COVID vaccines, so all of those pieces are true.

DOOCY: And there are protesters now in this country who are chanting as these protests in Cuba are going on, ‘Where is Biden?’ So where is he? What is he doing to protect these people who are rising up against the leaders of this failed experiment?

PSAKI: First, he is certainly advocating for and speaking out as we’ve put out a statement, multiple statements. Maybe one of you will ask him a question about Cuba today. I will leave it to all of you to determine that, but one, he has made clear that he stands with the Cuban people and their call for freedom from both the pandemic and from decades of repression and economic suffering to which they’ve been subjected by Cuba’s authoritarian regime. There is an ongoing review of our own policies, and as we look at those policies, one of the big factors is ensuring we are not doing anything to pad the pockets of a corrupt authoritarian regime, and that is certainly a factor as he’s considering, but we’re looking closely at how we can help in a humanitarian way, how we can help support the voices of the Cuban people, and there’s an ongoing policy review in that regard.

DOOCY: And we’d be happy to ask him later if he calls on us.