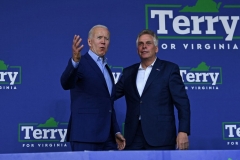 (CNSNews.com) - White House Press Secretary Jen Psaki said Friday that President Joe Biden is the most popular figure of anyone currently running for president or “any former recent president,” and “his agenda is incredibly popular.”

According to recent polling, Biden’s approval rating stands at only 44.2 percent.

“Well just if you look at facts in the polling, the president is the most popular figure in Virginia of anyone currently running for president or any former recent president, so I’d just note that in terms of the data, but I would say that the president’s agenda is incredibly popular,” Psaki said.

“That’s probably the reason why former Governor McAuliffe is also running on that agenda, whether it is reducing costs for the American people on child care, on elder care, making sure the tax system is more fair, rebuilding our roads, rails, and bridges,” she said.