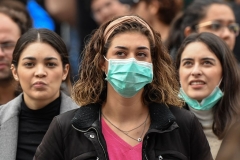 (CNSNews.com) - The CDC will change the guidance on masks based on “data and science,” White House Press Secretary Jen Psaki said on Tuesday, despite some states changing their guidance and even a teachers union asking for the White House to weigh in on the issue.

“You’ll have to ask the CDC. The CDC moves at the pace of data and science. I would note that our goal remains continuing to ensure that there is guidance that helps school districts stay open. That’s our goal. We want kids to be in school. Ninety-eight percent of schools are open.   That’s a very good sign,” Psaki said.

“We know what works. The CDC is always going to be reviewing their guidance, including mask guidance, but in terms of when they will provide additional new guidance, that is up to them,” she said.

“Do you believe then that the Democratic- led states who are breaking with the CDC on this guidance, that they’re not — that they’re throwing science away and that the CDC is — has access to different science somehow,” Heinrich asked.

“We don’t look at it through that prism. These states, I think it’s important to note, they still allow for decisions to be made by local school districts. Where we come up with concern — where we have great concern is if a kid or a parent chooses to wear a mask or a school district decides they should keep mask guidance in place, and there are leaders who are preventing them from doing that,” Psaki said.

She said that’s the case in some other states, “but our hope is that states, leaders will look at the science and data about what’s going on, they’ll make decisions about local school districts.”

“Local school districts have always made these decisions. That remains the case,” the press secretary said.