Psaki: CBO Score for Build Back Better Act Is ‘Fake’ Because It’s Based on a Bill That Nobody Is Voting on 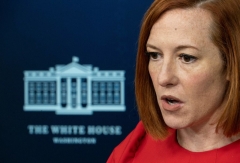 White House Press Secretary, Jen Psaki, speaks to reporters during the daily press briefing at the White House in Washington, DC on December 3, 2021. (Photo by ANDREW CABALLERO-REYNOLDS/AFP via Getty Images)

(CNSNews.com) – White House Press Secretary Jen Psaki called the CBO score for President Biden’s Build Back Better Act “fake,” because it’s based on a modified version of the bill ordered by Sen. Lindsey Graham (R-S.C.) that shows how much it will cost over a period of 10 years if its provisions were made permanent.

“The president says that Build Back Better won't add a penny to the deficit. The CBO has this new score where they assume social programs are going to be made permanent, and in that case, it would add $3 trillion. Does that mean that President Biden will commit that these programs won't be made permanent?” Fox News White House Correspondent Peter Doocy asked.

“What we’re talking about here is a fake CBO score that is not based on the actual bill that anybody is voting on. This was a ask request by Senator Graham to score a bill that is not currently being debated,” the press secretary said.

“That is his prerogative to do, but what our focus is on is on the existing bill that will lower the deficit, that will also over an additional 10 years pay for the $2 trillion tax cuts that Republicans didn’t pay for. They’re welcome for that,” Psaki said.

“So I would say, Peter, to your question, the president has conveyed very clearly, multiple times publicly that he would like programs if they’re extended to be paid for,” she said.

“That remains his commitment, but it’s important to understand that when you-- when anybody raises a question about this new CBO score. It is a fake score about a bill that doesn't exist, and we should really focus on the actual bill everybody’s going to vote on and considering in Congress right now,” Psaki added.

In a letter to Graham and Rep. Jason Smith (R-Mo.), who serves on the House Budget Committee, the Congressional Budget Office said “a version” of the Build Back Better bill “modified” as Graham and Smith “specified would increase the deficit by $3.0 trillion over the 2022–2031 period.”

That amount includes three components: effects usually counted in CBO’s cost estimates (which are labeled conventional effects in the table), the effects of increased resources for tax enforcement, and effects on interest on the public debt.

Under long-standing guidelines agreed to by the legislative and executive branches, estimates to be used for budget enforcement purposes include the first component but not the second and third.

In comparison, including the same three components, the version of H.R. 5376 that was passed by the House of Representatives would increase the deficit by $0.2 trillion over the 2022–2031 period, CBO projects. The largest difference between the two estimates stems from an increase in the child tax credit that ends after 2022 in the House-passed version of the bill.

The CBO also determined that the bill would add $200 billion to the deficit in 10 years.