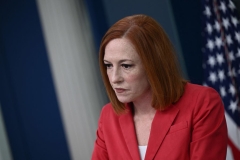 White House Press Secretary Jen Psaki speaks during the daily briefing in the Brady Briefing Room of the White House in Washington, DC, on April 25, 2022. (Photo by BRENDAN SMIALOWSKI/AFP via Getty Images)

(CNSNews.com) - A Catholic Church in Boulder, Colo., was reportedly vandalized this week with pro-abortion graffiti like “my body my choice.”

While White House Press Secretary Jen Psaki said she had not seen the news report, she said the White House does not condone vandalism.

“A Catholic church was just vandalized with pro-abortion slogans in Colorado.  It just happened recently. Is the White House aware of that, first of all?” a reporter asked.

PSAKI:  I’ve not seen that report. Obviously, we don’t condone vandalism. We condone peaceful protest, and that’s something certainly we’re encouraging with everybody who feels passionate–

REPORTER: What would you say to those vandals going after — targeting Catholic churches, especially when it involves Roe?  That’s what they’re basically focusing on.

PSAKI:  Again, we don’t condone vandalism. We condone peaceful protest. I think it’s important to note that 60 percent or 70 percent, depending on the poll you look at, of the American people do not want Roe to be overturned.