Psaki: Border Patrol Will No Longer Be Using Horses in Del Rio 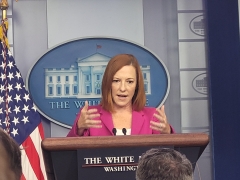 Psaki said that DHS Secretary Alejandro Mayorkas told civil rights leaders Thursday morning about the decision ahead of the results of an investigation into Border Patrol agents handling of Haitian migrants attempting to cross the Rio Grande River into Texas.

As CNSNews.com previously reported, Mayorkas on Tuesday condemned the actions of Border Patrol agents who were accused of using horse reins to “whip” Haitians trying to illegally enter the U.S., saying Tuesday, “We do not condone, we do not tolerate any mistreatment of any migrant. The actions we're taking are swift and strong, and we will take further action as the facts adduced in the investigation compel.”

Psaki was asked Thursday for reaction to some Democrats who are comparing the incident to the Trump administration’s handling of illegal immigrants.

“We haven’t yet heard recently from President Biden specifically about these images on the border. You have described him as saying that they’re horrible, but what does he believe of the comparisons being made between his administration and the Trump administration? We saw Congresswoman Maxine Waters today saying this is Trump’s policy. Some other Democrats are saying this looks like the previous administration. What does he think of those comments?” a reporter asked.

“We could not see it as anymore different than the policy from the prior administration, which the president feels - we all feel - was inhumane, immoral, ineffective, not operationally, wasn’t operationally working, and because of the dysfunction of it, we have led to a very broken system that we’re dealing with today,” Psaki said.

“So what he has asked all of us to convey clearly to people who are understandably have questions, are passionate, are concerned, as we are about the images that we have seen is one, we feel those images are horrible and horrific. There is an investigation. The president certainly supports overseen by the Department of Homeland Security, which he has conveyed will happen quickly,” she said.

“I can also convey to you that the secretary also conveyed to civil rights leaders earlier this morning that we would no longer be using horses in Del Rio, so that is something, a policy change that’s been made in response, but separately, all related it’s also important for people to understand what our process and our immigration process is and what our steps are that are taken,” the press secretary said.

“We are still under Title 42 because we are in a global pandemic, so we are still operationalizing that. If people are not expelled under that, then there are a range of options. Either they are put into an alternative to detention where biometric data is required. They are given a notice to appear or they are given or they are put in an ICE facility. This is the process that is ongoing and has happened for every other migrant who has attempted to come irregularly across the border,” Psaki added.