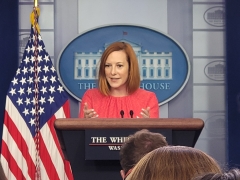 “Many of us were in the East Room watching the president. We’ve seen him on many occasions where he has a repeated cough. What is the situation with that cough, and is that a concern?” O’Donnell asked.

“It’s not a concern. He has a doctor that travels with him obviously who checks in if it is ever warranted, and certainly, that continues to be the case as it has been since the beginning of his presidency,” White House Press Secretary Jen Psaki said.

“Is there an explanation for why he coughs so frequently in situations like that? I’m sure you saw it,” O’Donnell said.

“I did. I don’t think it’s an issue of concern. I think there are a range of reasons why we may need to clear our throat or we may have a little light cold, and that’s certainly something that presidents, elected officials, reporters, spokespeople can confront, but it’s not an area where we have a medical concern,” Psaki said.

A reporter later asked when Biden would get a physical exam.

“I know this is an understandable question. I don’t have an update. He will get one soon, and when he does, we will make sure you all are aware of it and get the information,” Psaki said.