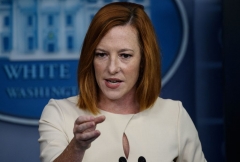 (CNSNews.com) - President Biden wasn’t making a market assessment on the gas industry when he warned Tuesday that if Russia invades Ukraine there could be an impact on energy prices in the U.S.,” White House Press Secretary Jen Psaki said Tuesday.

“I will not pretend this will be painless. There could be impact on our energy prices, so we are taking active steps to alleviate the pressure on our own energy markets and offset rising prices,” Biden said Tuesday.

“Markets have obviously already been reacting to that situation. Gasoline prices are up 20 cents a gallon over the last 30 days on average. Is the president saying that if people are paying more at the pump, that is essentially a direct result of Vladimir Putin’s actions and he is to blame for the current burst we’ve seen in higher prices?” a reporter asked Psaki Tuesday.

“Well, the president wasn’t making a market assessment or how the market moves. What he was conveying very — very clearly to the American public is that if Russia to — were to invade and we were to put in place crippling sanctions, that would have consequences or an impact here at home,” the press secretary said.

“So I know that wasn’t exactly how you were asking the question, but that was what he was conveying in his answer.  In terms of the price of gasoline, what we’ve seen — as we know, back in December, it went down by about 10 cents, thanks to tapping the Strategic Petroleum Reserve — something where there’s still releases that have been ongoing,” she said.

“The president also made clear in his remarks that he is open to — all options are on the table to help bring down the price of gasoline, but he wasn’t making a market assessment; he was just making clear to the public that if Russia invades and we put in place crippling sanctions, that would have an impact on the public,” Psaki said.

“Following up on this energy question in terms of the impact on our energy, which the president mentioned and then the consequences here at home. What should Americans be prepared for? Worst-case scenario, what should they expect if this happens?” another reporter asked.

“And we’re taking — while we are taking active steps to alleviate the pressure on our own energy markets — and every option is on the table to offset rising prices, as you saw the president act last fall — a range of options remain on the table — he also wanted to be very clear and direct with the American people about what the impact could be and the fact that, in his view, defending democracy and liberty is never without cost, but we need to convey to the American people exactly what that could look like,” she said.