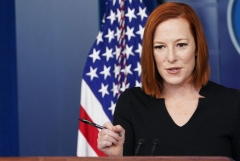 White House Press Secretary Jen Psaki speaks during the daily briefing in the Brady Briefing Room of the White House in Washington, DC on January 4, 2022. (Photo by MANDEL NGAN/AFP via Getty Images)

Fox News White House Correspondent Peter Doocy asked, “But as he talked about a year ago and working with Republicans, now he is talking about Republicans that don’t agree with voting rights. He’s describing them as George Wallace, Bull Connor, and Jefferson Davis. What happened to the guy who when he was elected said, ‘to make progress, we must stop treating our opponents as our enemy?’”

“I think everybody listening to that speech who’s speaking on the level as my mother would say would note that he was not comparing them as humans. He was comparing the choice to those figures in history and where they’re going to position themselves as they determine whether they’re going to support the fundamental right to vote or not,” Psaki said.

He urged Democrats to get rid of the filibuster in order to pass two Democrat voting rights bills designed to federalize elections. He wants to weaken voter ID laws and allow ballot harvesting and same-day voter registration, arguing that refusing to allow either amounts to voter “suppression.”

As CNSNews.com previously reported, such bills will allow Democrats in Washington to take over every election in every state.