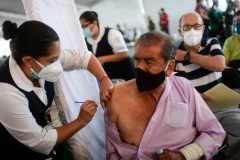 An elderly man receives a dose of the CoronaVac vaccine against COVID-19 at a vaccination center in Mexico City, on March 17, 2021. (Photo by PEDRO PARDO/AFP via Getty Images)

(CNSNews.com) – The Biden administration is planning to “loan” millions of doses of the AstraZeneca vaccine for COVID-19 - which has yet to be approved by the FDA in the United States, but has been approved for use overseas – to Mexico.

Out of the 7 million “releasable doses” that the U.S. has on hand, 2.5 million will go to Mexico, and 1.5 million to Canada.

At the same time, President Joe Biden is in talks with Mexico about helping with the crisis at the U.S.-Mexico border.

“The reality is that — but the reality is the border knows no — the pandemic knows no borders, and ensuring our neighbors can contain the virus is a mission-critical step — is mission critical to ending the pandemic. We have three vaccines approved, as you well know, and, of course, there’s a rigorous review process by the FDA,” Psaki said.

“There are other vaccines, of course, including AstraZeneca, that are going through the approval process now, and we have been taking action here to get ready to get those vaccines to the American people if they are approved,” she said.

“That includes Canada and Mexico, but it’s certainly not limited to Canada and Mexico, and balancing the need to let the approval process play out of the AstraZeneca vaccine as it’s taking place in the U.S. with the importance of helping stop the spread of the — of — in other countries — we are assessing how we can loan doses. It’s not — it’s — we are — that is our aim,” Psaki said.

“I can confirm that we have 7 million releasable doses available of AstraZeneca, and as noted in Jeff’s ‘scooplet’ -- which I’m just going to keep calling it -- 2.5 million of those, we are working to finalize plans to lend those to Mexico and 1.5 million to Canada,” the press secretary said.

Psaki confirmed that it “could be for future AstraZeneca doses or other doses.”

When asked whether there are any strings attached to the vaccine deal in regards to the situation on the border, she said, “There are several diplomatic conversations, parallel conversations, many layers of conversations with any — every country — Mexico, Canada, Europe, Asia, around the world, and certainly, being part of contributing to preventing the spread of a global pandemic is part of — one of our diplomatic objectives.

“Another one of our diplomatic objectives is working to address the challenges at the border. So it shouldn’t be a surprise that those conversations are both ongoing and happening,” the press secretary said.

When pressed on whether there were any expectations set with Mexico that they help deal with the crisis at the border, in other words, a quid pro quo, Psaki said, “There have been ex- — there have been expectations set outside of — unrelated — to any vaccine doses or request for them that they would be partners in dealing with the crisis on the border, and there have been requests, unrelated, that they — for doses of these vaccines. Every relationship has multiple layers of conversations that are happening at the same time.”

Asked whether the U.S. is not ruling out using the vaccine stockpile to effect diplomacy, the press secretary said, “I’m actually trying to convey that with every country, there’s rarely just one issue you’re discussing with any country at one time. Right? Certainly that’s not the case with Mexico.

“It’s not the case with any country around the world, and so I wouldn’t read into it more than our ability to provide, to lend vaccine doses of a vaccine that we have some available supply on to a neighboring country where there is a lot of traffic that goes back and forth between the countries,” she said.

Former U.N. Ambassador Nikki Haley tweeted Friday, “Biden blames Trump for the border crisis that he himself created, and now, he’s asking Mexico to help him keep migrants out. Guess whose idea that was in the first place? That's right, Trump's.”