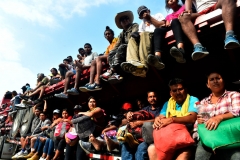 Migrants who where heading in a caravan to the US, travel in a truck in Nuevo Morelos, Jesus Carranza municipality, Veracruz state, Mexico, on November 17, 2021. (Photo by CLAUDIO CRUZ/AFP via Getty Images)

(CNSNews.com) - White House Press Secretary Jen Psaki said Monday that President Joe Biden is keeping the Trump-era Remain in Mexico policy, which requires refugees to remain in Mexico while their asylum claims are adjudicated, despite the president’s claim that it is “dangerous” and “inhumane” because the administration believes in “following the law.”

In August, a Texas district judge ruled that the administration must make a good faith effort to reinstate the policy.

Fox News White House Correspondent Peter Doocy asked, “On immigration: Joe Biden once described the ‘Remain in Mexico’ policy as ‘dangerous, inhumane, and goes against everything we stand for as a nation of immigrants.’ So why is he keeping it?”

“He continues to stand by exactly those comments and statements, and the secretary of Homeland Security put out a memorandum conveying we want to end this program, but we also believe in following the law, and that’s exactly what we’re doing as there was — there was a ruling that required us moving forward with implementation,” Psaki said.

Mexico is imposing a six-month deadline for asylum cases to be adjudicated in U.S. immigration courts, Forbes reported Monday. It’s also asking for the United States to accelerate development programs for southern Mexico and Central America to address the root causes of migration.