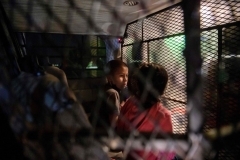 In a photo taken on March 27, 2021 two unaccompanied seven year-old child immigrants who arrived illegally across the Rio Grande river from Mexico stand at a makeshift processing checkpoint before being detained at a holding facility by border patrol agents in the border city of Roma. (Photo by ED JONES/AFP via Getty Images)

(CNSNews.com) - According to a Washington Post analysis, the administration is spending $60 million a week to house 16,000 migrant children, which amounts to $3.1 billion a year.

When asked where the money is coming from, White House Press Secretary Jen Psaki noted that the Trump administration requested “nearly $3 billion in supplemental funding from Congress” in 2019 for the Unaccompanied Children program.

“First, I would say that as you may recall, the prior administration requested and received nearly $3 billion in supplemental funding from Congress for the UC program back in 2019,” the press secretary said.

“That came after the previous administration had already made multiple transfers of hundreds of millions of dollars, and our commitment is to ensuring HHS has the funds it needs now to safely and humanely care for children, which of course is resource intensive. We know that,” she said.

“There are 200 permanent shelters around the country, and there are needs related to the pandemic – social distancing, enhanced ventilation and testing – that are additional needs given the time that we’re living in,” Psaki added.

When asked whether the administration is concerned that the costs will rise significantly and that the shelters might be draining pandemic response elsewhere, the press secretary said, “No, that is not what our concern is at all. We have funding for the pandemic response. I’m just conveying to you what we feel this cost is, and why it is at the rate it is at this point in time.”