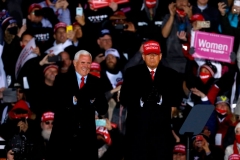 President Donald Trump and Vice President Mike Pence stand on stage at the end of the final Make America Great Again rally of the 2020 US Presidential campaign at Gerald R. Ford International Airport on November 2, 2020, in Grand Rapids, Michigan. (Photo by JEFF KOWALSKY/AFP via Getty Images)

In an interview with Fox Business’s “Mornings with Maria Bartiromo,” Norpoth said his election model is based on “real elections, real polls, not hypothetical ones.”

“And as you said, over 100 plus years of elections, a formula that uses the outcome of primary elections plus something else has done pretty well in picking the winner in presidential elections,” he told host Lou Dobbs.

When asked to explain what states Trump has to win to get 362 electoral votes, Norpoth said, “Well, I don't know the exact number of states. My prediction is based on sort of the overall number of electoral votes that I track over the last 27 elections going back to 1912. I would have to speculate exactly on what states would be included. Certainly, all the states that he won last time plus two or three others.

“I can't quite make a complete prediction about that. That's something sort of above my pay grade. Other people who do state-by-state predictions would have to help me out with that, but what I'm definitely saying is that Donald Trump has a 91% chance of clearing 270, which is the minimum to win election, re-election in this case,” he said.

“Well, that, and that number is astonishing, and it's just about the inverse, for example, if you look at 538, any number of polls give him about a 10% chance and his opponent 90,” Dobbs noted.

“How confident are you in this number this year? When you and I talked four years ago, you stood alone, and you stand alone in 2020. I think that's a pretty good, put good indicator for the outcome of this election, but tell us what there is that gives the president such a dominant position going into tomorrow's election,” he said.

“Well, as you mentioned, I've gone through this experience before in 2016 when I was at odds with these kinds of predictions based on polls that gave Donald Trump barely a chance. There were some that gave barely a 2% chance,” Norpoth said, adding that “538 was a little better than that.”

“I think in retrospect we know that Donald Trump's victory will come from a few handful of states which are very competitive and which he won by a pretty narrow margin like Wisconsin, Michigan Pennsylvania, and, of course, he has to hang on to Ohio, North Carolina and Florida, and I think if he does that, I think he could repeat even though he may lose the popular vote again, which happened last time,” he said.

“I mean, the popular vote is so skewed in states like California where Hillary Clinton won by more than 4 million votes. That was more than the national total. So a couple of states will do it, and so for Donald Trump, it's really important to really concentrate on a handful of battleground states, and when I looked at those states, I see that while Donald Trump is perhaps behind overall in the average, he's about where Hillary Clinton was four years ago,” Norpoth said.

“So I can see the same thing, and if the polls haven't really learned anything or done anything better this time than last time, I don't, I don't see that they will be right, and I will be wrong,” he said.