Pompeo: Putin Has ‘No Fear’ of the U.S. and ‘the Response We Might Take’ 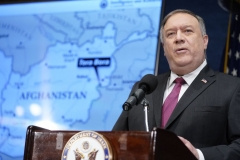 (CNSNews.com) - Former Secretary of State Mike Pompeo said Tuesday that because the Biden administration has been “so muddled” in its response that Russian President Vladimir Putin “has no fear of the United States of America and the response we might take.”

When asked whether he sees what Russia did on Monday as a minor incursion or an invasion, Pompeo said, “This is angels on the head of a pin.

“The administration has been so muddled in the way they've made Vladimir Putin have the upper hand throughout this entire time. Every time Putin acts we are on our back foot. He does -- he has no fear of the United States of America and the response we might take,” he told Fox News’s “America Reports.”

“Even this morning he’s not moved peacekeeping troops in but moved in his tanks, and we abandoned Ukraine with our diplomats, but apparently that's not enough to support the Ukrainian people,” the former secretary of state.

“This has been a model of how when you fail at deterrence, when you fail to demonstrate the resolve necessary to protect things that matter not only to the Ukrainian people and not only to eastern Europe but to the people of the United States of America, when you aren't prepared to defend those things that matter most, then the bad guys in the world will begin to do what you are seeing Vladimir Putin start today,” he said.

As to what “proper deterrence” would have been during the Trump administration, Pompeo said, “The only thing that has changed in the last 14 months is the leadership in the United States of America. We’ve all known Vladimir Putin a long time. I spent a great deal of time with him and his lieutenants. He hasn't changed.

“His vision for reinstating the greater Soviet Union and creating a sphere of influence was precisely the same for the four years I was in office alongside President Trump. We were determined to convince him there were things he could not do and we put lots of sanctions on him, but where we could work with him we could. We had a model for engagement and deterrence that stopped him from doing precisely what you’re seeing happen this morning,” he said.

When asked what could or would have stopped Putin, Pompeo said, “Well, we stopped him with an idea that said the United States is going to protect the things that matter. This is the very concept of strategic deterrence. Today, these are things President Biden could have done. We could have stopped Nord stream 2 months ago when it was much further away from completion.

“They could have begun to put real sanctions in place. I saw what the president signed last night. I must say Vladimir Putin saw them put sanctions for those two parts of Ukraine and he viewed that as a green light for continued aggression. We could begin to have NATO forces to Estonia, Lithuania, and Latvia to protect those countries,” the former secretary of state said.

“We could have rallied the West and Europe to say that these are the things that we will do together. They’ve been unable to do each of those or perhaps haven't been interested or focused elsewhere and then Bill, I'll add one more thing. It’s not just about this place with Russia and Ukraine, right? The Russians confront us in Syria,” he said.

“XI Jinping’s watching what is happening here and Chairman Kim. Each time we fail to demonstrate American resolve whether it is the debacle that was Afghanistan that caused 13 Americans to perish as we exited. Those are the kinds of things that convince people like Vladimir Putin that his dream of recreating the Soviet Union is something that he may well be able to do under this leadership's watch here in the United States,” Pompeo added.

“It must. This is in the first instance a challenge to the European order, the European system. Certainly, the Eastern European countries need countries like France and Germany and Italy to come in and support them in their time of need this time when there is a real security interest. Putin has bigger plans,” the former secretary of state said.

“He has more aggression in mind, and it will take a united Europe to lead the effort to confront that, and Dana, one last thought on energy. The other thing that we did in the Trump administration is we made sure European countries knew that American energy would be produced, it would be affordable, and we would be happy to provide it to them,” he said.

“This administration came in and shut it down. I'm sure that the European countries realize now an American energy source - whether it was oil and crude and gas flowing from the United States to the Keystone Pipeline or wherever - probably wasn't going to be available to them, and they engaged in activities that protected their energy interests,” Pompeo said.

“You will see higher gas prices here in the United States. Farmers in Kansas are going to see higher fertilizer prices because the energy costs will go up. This has real impacts at home here Dana, and it’s something that President Biden has failed to protect us against,” he said.