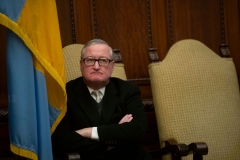 (CNSNews.com) – Pennsylvania was still considered too close to call on Friday afternoon, and Philadelphia poll workers are still counting ballots, but that didn’t stop Mayor Jim Kenney from saying he thinks former Vice President Joe Biden will be the next president.

Speaking at a press conference just before 1 p.m. on Friday, Kenney also called out President Donald Trump, telling him to put his “big boy pants on” and “acknowledge the fact that he lost.”

The mayor said Trump “needs to congratulate the winner” just as former Presidents Jimmy Carter and George H. W. Bush did” as well as former Vice President Al Gore. At first Gore conceded the election, but then took it back and challenged the results of the 2000 election, which led all the way up to the U.S. Supreme Court and eventually led to President George W. Bush being declared the winner.

“I think what the president needs to do is frankly, put his big boy pants on. He needs to acknowledge the fact that he lost, and he needs to congratulate the winner just as Jimmy Carter did, just as George H.W. Bush and frankly, just as Al Gore did, and let us move forward as a country, and that’s my feeling. I doubt he’ll listen to me, but that's it,” Kenney said.

Philadelphia alone has upwards of 40,000 ballots yet to be counted, according to Philadelphia City Commission Chairwoman Lisa Deeley. That doesn’t include the military overseas ballots, which are due to arrive by Nov. 10.

Deeley said she didn’t know how many segregated ballots there were.

Biden was leading Trump in Pennsylvania 49.5 to 49.3 percent as of Friday afternoon.