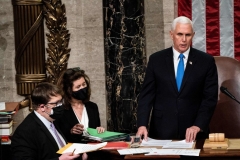 Vice President Mike Pence presides over a Joint session of Congress to certify the 2020 Electoral College results after supporters of President Donald Trump stormed the Capitol earlier in the day on Capitol Hill in Washington, DC on January 6, 2021. (Photo by ERIN SCHAFF/POOL/AFP via Getty Images)

(CNSNews.com) – Former Vice President Mike Pence on Thursday pushed back on the narrative that black people are in danger around the police, and he said liberal efforts to defund the police have set off a violent crime wave that is wreaking havoc nationwide.

“As our soldiers protect us abroad, we also do well to always pay a debt of honor and a debt of gratitude to those who put on a different uniform every day, put on a sidearm, and like my uncle who walked a beat for 25 years, count our lives every day as more important than their own. Law enforcement officers in the U.S. are heroes, and they should be honored by every American every day,” he said in a speech at the annual Lincoln-Reagan Dinner hosted by the Hillsborough County Republicans in New Hampshire.

“Last August, at Ft. McHenry, I told the American people that they wouldn’t be safe in Joe Biden’s America, and it grieves my heart to report to you tonight in Hillsborough County that murders have now increased by more than a third in our largest cities. Democrat efforts to defund the police, withdraw support for law enforcement has set off a violent crime wave that’s wreaking havoc in families all across the nation,” Pence said.

“Black lives are not in danger by police. Black lives are saved by police every day. We don’t need to defund the police. We need to defend the police and reject the anti-law enforcement agenda of Joe Biden and the Democrats in Washington and put the lives of law-abiding citizen of every race and creed and color first,” the former vice president said.

“It’s just amazing when you think of it – 144 days. In 2020, remember Joe Biden was campaigning as a moderate when he campaigned but he’s literally governed as the most liberal president since FDR. Even AOC said President Biden had ‘exceeded progressives’ expectations,’ and that’s saying a lot. But I don’t believe for one moment that that’s what the American people voted for in 2020,” Pence said.

“They didn’t vote to open borders, to give away safety of our streets, their prosperity, our freedom or our future,” he said.