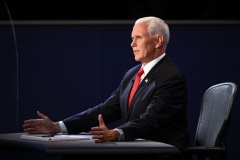 Vice President Mike Pence Mike Pence gestures as he speaks during the vice presidential debate in Kingsbury Hall at the University of Utah on October 7, 2020, in Salt Lake City, Utah. (Photo by ROBYN BECK/AFP via Getty Images)

“The reality is, when you look at the Biden plan, it reads an awful lot like what President Trump and I and our task force have been doing every step of the way, and quite frankly, when I look at their plan that talks about advancing testing, creating new PPE, developing a vaccine, it looks a little bit like plagiarism, which is something that Joe Biden knows a little bit about,” Pence said at ABC’s vice presidential debate on Wednesday.

The debate kicked off with moderator Susan Page asking Democratic vice presidential nominee Sen. Kamala Harris (D-Calif.) what a Biden administration would do in January and February that a Trump administration wouldn’t do, whether they would impose new lockdowns for businesses and schools in hot spots, and if it would include a federal mandate to wear masks.

HARRIS: Thank you, Susan. Well, the American people have witnessed what is the greatest failure of any presidential administration in the history of our country, and here are the facts: 210,000 dead people in our country in just the last several months. Over 7 million people who have contracted this disease. One in five businesses closed. We're looking at front line workers who have been treated like sacrificial workers. We are looking at over 30 million people who in the last several months had to file for unemployment, and here's the thing.

Can you imagine if you knew on January 28th as opposed to March 13th what they knew, what you might have done to prepare? They knew and they covered it up. The president said it was a hoax. They minimized the seriousness of it. The president said, you're on one side of his ledger if you wear a mask, you're on the other side of his ledger if you don't, and in spite of all of that, today, they still don't have a plan. They still don't have a plan.

Well, Joe Biden does, and our plan is about what we need to do around a national strategy for contact tracing, for testing, for administration of the vaccine and making sure it will be free for all. That is the plan that Joe Biden and that I have, knowing that we have to get ahold of what has been going on and we need to save our country and Joe Biden is the best leader to do that and frankly, this administration has forfeited their right to re-election based on this.

PENCE: Susan, thank you, and I want to thank the commission and the University of Utah for hosting this event and senator Harris, it's a privilege to be on the stage with you. Our nation has gone through a very challenging time this year, but I want the American people to know that from the very first day, president Donald Trump has put the health of America first.

Before there were more than five cases in the United States, all people who had returned from China, president Donald Trump did what no other American president had ever done, and that was, he suspended all travel from China, the second-largest economy in the world. Now, senator, Joe Biden opposed that decision. He said it was hysterical. I can tell you, having led the coronavirus task force that that decision bought us invaluable time to stand up the greatest national mobilization since World War II and I believe it saved hundreds of thousands of American lives, because with that time, we were able to reinvent testing, more than 115 million tests have been done to date.

We were able to see to the delivery of billions of supports to doctors and nurses had the resources they needed and began, really before the month of February, started to develop a vaccine and to develop medicines and therapeutics that have been saving lives along the way. Under President Trump's leadership, Operation Warp Speed, we believe we'll have tens of millions of doses of a vaccine before the end of this year.

The reality is, when you look at the Biden plan, it reads an awful lot like what President Trump and I and our task force have been doing every step of the way, and quite frankly, when I look at their plan that talks about advancing testing, creating new PPE, developing a vaccine, it looks a little bit like plagiarism, which is something that Joe Biden knows a little bit about. And I think the American people know this is a president who has put America first and the American people, I believe with my heart, can be proud of the sacrifices they have made.

HARRIS: Absolutely. Whatever the vice president is claiming the administration has done, clearly, it hasn't worked. When you are looking at over 210,000 dead bodies in our country. American lives that have been lost, families that have grieving that loss. And, you know, the vice president is the head of the task force. And knew on January 28th how serious this was. And then, thanks to Bob Woodward, we learned that they knew about it and then when that was exposed, the vice president said, when asked, well, why didn't y'all tell anybody? He said because the president wanted people to remain calm. But Susan, this is important, Mr. Vice president, I'm speaking.

PENCE: I have to weigh in.

PAGE: You have 15 more seconds, and then we'll give the vice president a chance.

PAGE: Let's give Vice President Pence a chance to respond. You have one minute to respond.

HARRIS: I'm referring to the president.

PENCE: If I may finish. The reality, is Dr. Fauci said, everything that he told the president in the Oval Office. The president told the American people. President Trump has boundless confidence in the American people, and he always spoke with confidence that we'd get through this together. When you say it hasn't worked, when Dr. Fauci and Dr. Birx and our medical experts came to us in the second week of March, they said, if the president didn't take the unprecedented step of shutting down roughly half of the American economy, that we could lose 2.2 million Americans. That's the reality.

PENCE: They said to us, if we did everything right, Susan, we could still lose more than 200,000 Americans. One life lost is too much.

PENCE: But the American people, I believe, deserve credit for the sacrifices that they have made putting the health of their family and their neighbors first, our doctors, our nurses, our

PENCE: And I'm going to speak up on behalf of what the American people have done.