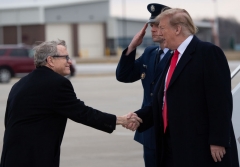 President Donald Trump shakes hands with Ohio Governor Mike DeWine as he disembarks from Air Force One upon arrival at Akron-Canton Airport in Canton, Ohio, March 20, 2019, as he travels to attend a fundraiser. (Photo by SAUL LOEB/AFP via Getty Images)

(CNSNews.com) - Ohio Gov. Mike DeWine told ABC’s “This Week with George Stephanopolous” on Sunday that in his personal experience, despite allegations that President Donald Trump called fallen soldiers “losers” and “suckers,” the president has been “extremely respectful” in regard to the military.

“Any time I've been with the president, there's ever been any discussion about the military, he has been extremely respectful, what you would expect of the president. So, you know, that's been my personal experience,” DeWine said.

According to The Atlantic, Trump made the disparaging comments during a trip to France in 2018 about ceremonies marking the 100th anniversary of the end of World War I.

He said that Jeffrey Goldberg of The Atlantic and Jennifer Griffin from Fox News, who said she had confirmed parts of the article, are “certainly respected journalists, but like my friend Chuck Hagel - Chuck and I served in the Senate together - and you know, one of the things he just said in your interview was, you know, people should come forward if they, you know, anonymous sources are interesting, but, you know, it's never going to have the credibility, I think, for the general public unless someone -- you know, people actually come forward and are willing to do that.”

“But, again, my experience with the president has been, he's been extremely respectful, exactly what you would respect a president in regard to any reference, any conversation, you know, in -- in regard to the military. You know, he's come into Ohio at Wright Patterson Air Force Base. He was here. We've had discussions about, you know, the military,” the governor said.

“Governor, I want to stop you for a second because you know what he said about John McCain in the past,” ABC’s Martha Raddatz said.

“Sure. Look, I don't agree with that,” DeWine said.

“So, does that change your mind at all?” Raddatz asked.

“John McCain was a friend. John McCain, I have great respect for. He was a dear, dear personal friend of mine,” DeWine said.