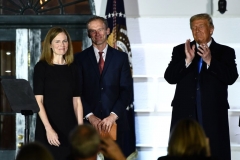 (CNSNews.com) – When Johanna Maska, former Obama director of press advance and global situation room, appeared on Fox Business’s “Mornings with Maria Bartiromo” on Tuesday to discuss the confirmation of Supreme Court Justice Amy Coney Barrett, she insisted that the Republicans “packed the court,” because they used their constitutional power to fill the vacant seat before Election Day.

Democratic presidential nominee Joe Biden has ruled out changing term limits, but said he’ll establish a commission to decide what changes could be made to the Supreme Court.

Host Maria Bartiromo asked Maska what Democratic presidential nominee Joe Biden will say about what he plans to do about the Court.

“Yeah, Joe Biden has a point, right. The Republicans had eight months to hear the nomination of Merrick Garland under President Obama's tenure, and they refused, and now with eight days before the election, they’ve pushed through a Supreme Court nominee, and you know, it really reeks of trying to steal political power, and I don't think any American wants our justice to be political,” Maska said.

BARTIROMO: They didn't pack the court. That's incorrect. They didn't pack the court at all. No, I understand that the Democrats are upset that this president will end up being one of the most consequential presidents of our time, because he was able to appoint three Supreme Court seats. I understand that, but that's not packing the court. That happens to be the fact that President Trump was in power --

MASKA: It is, it is, expanding the court.

BARTIROMO: No, it’s not. It's not. They did not expand the court. There have been nine Supreme Court justices since 1880 – nine. There have never been more than nine justices. We still have nine since 1880. You’re not packing the court.

MASKA: Right, so You're talking about expanding the court.

Bartiromo asked RNC spokeswoman Liz Harrington to weigh in, but had to correct Maska once again.

MASKA: And they left it at eight for eight months.

HARRINGTON: Following the Constitution is not packing the Supreme Court. You're absolutely right, Maria, and it was a history-making day yesterday, the first working mother to ever sit on the supreme court, someone who loves the constitution and loves the United States of America and what did Chuck Schumer say, it was one of America's darkest days.
That's how poisonous Democrats have become with their politics, and now you not only have the leader of the Democrats in the Senate and the House and the nominee for president on the Democrat side all open to blowing up the judicial branch just because they didn't get their way, just because they lost elections and elections have consequences.
Well, Republicans follow through on the promises we make to the American people, and we also follow the Constitution. That's why we filled that seat with the most qualified nominee we've seen in generations, and we know Justice Amy Coney Barrett is going to be a phenomenal justice, associate justice on the Supreme Court.

Maska then corrected Harrington, saying that Barrett is not the first working mother to join the high court. The late Supreme Court Justice Ruth Bader Ginsburg was also a working mother, she said.

“Just with all due respect, Liz, Ruth Bader Ginsburg was also a working mother so I am thrilled to see more mothers get power, but I don't think President Trump did her any favors, and I don't think he's done any of the American people any favors,” Maska said.