NRA CEO: ‘Restricting the Fundamental Human Right of Law-Abiding Americans to Defend Themselves Is Not the Answer’ 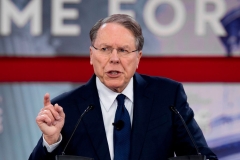 (CNSNews.com) – National Rifle Association CEO Wayne LaPierre addressed the Uvalde school shooting at the group’s national convention in Houston, Texas, on Friday, saying that restricting the rights of law-abiding citizens to own firearms is not the answer to gun violence.

“I want to talk about the evil that occurred at Robb Elementary School in Uvalde, Texas, on Tuesday. Every NRA member, and I know every decent American is mourning right now. 21 beautiful lives ruthlessly and indiscriminately extinguished by a criminal monster. We are with this community and all of America in prayer. NRA members are parents. We have sons, daughters, and loved ones,” he said.

“These tragedies cause gut-wrenching unimaginable pain that too many are being forced to go through right now. It’s not right. It should never happen again. If we as a nation were capable of legislating evil out of the hearts and minds of criminals who commit these heinous acts, we would have done it a long time ago,” LaPierre said.

“We do not agree with President Biden on the 2nd Amendment, but we share common ground on this: Last week, the president said, I’m not naïve. I know tragedy will come again. It cannot be forever overcome. It cannot be fully understood either, but there are certain things we can do. NRA members know that to be true,” the CEO said.

“There are absolutely certain things we can and must do. Where we part ways with the president and those in his party is on the policy question, and what we can and should do to prevent the hate-filled vile monsters who walk among us from committing their evil. Restricting the fundamental human right of law-abiding Americans to defend themselves is not the answer. It never has been,” he said.

“We need to protect our schools, because our children deserve at least and in fact more protection than our banks, stadiums, and government buildings. They are our most treasured and precious resource, and they deserve safety and protection,” he said.

“That’s why the NRA launched our school shield program to help promote and fund the necessary security that every school child needs and deserves. That’s why we help train school security assessors, who play a vital role in improving the security and safety of every child from when they get off the bus in the morning to when the final bell rings at the end of the day,” LaPierre said.

“We also need to fully fund our nation’s police departments and school security resource officer programs so that every school has a comprehensive security program tailored specifically to that school to meet its security needs, and that’s why we as NRA members work so hard to support and train our men and women in law enforcement in the security profession,” he said.

“We also need to fully fund and fix our nation’s broken mental health system. We need to put violent felons in prison where they belong and put an end to the revolving door justice system that spits criminals back onto the streets and greases the skids for the next horrific crime, and finally, to quote the late Ronald Reagan, we must reject the idea that every time a law is broken, society is guilty rather than the law breaker,” LaPierre said.

“It’s time to restore the American precept that each individual is accountable for his actions, and that’s why we, the NRA, will never, ever stop fighting for the right of the innocent and the law-abiding to defend themselves against the evil criminal element that plagues our society, because we know there can be no freedom, no security, no safety without the right of the law-abiding to bear arms for self-defense,” he said.