National Security Adviser: G7 Summit Could Be Held in DC by End of June 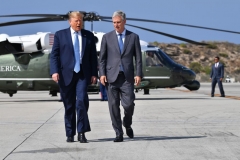 (CNSNews.com) - The Trump administration is welcoming G7 leaders to attend the summit in Washington, D.C. at the end of June even as the nation’s capital is considered to have the highest positivity rate for COVID-19 in the nation, National Security Adviser Robert O’Brien told CBS’s “Face the Nation” on Sunday.

When asked whether all G-7 leaders agreed to come to Washington and whether it is advisable to do that, O’Brien said, “The G-7 summit, if it happens in person - and we think it will - will take place at the end of June. So we're-- I think we're getting very close to the peak, if we're not at the peak already in Washington and if the situation permits it - and we think it will - we'd love to have the G-7 in person.

“I think the G-7 leaders would love to meet in person and not do a video conference. So the president extended the invitation, and so far we've got a great response. The logistics--we'll make sure everybody is tested. We'll make sure that it's a safe environment if the leaders can come here, but we'd love to host them in Washington,” he said.

“So end of June, no longer June 10th for the G-7?” host Margaret Brennan asked.

“No, I think we would be looking at the end of June at this point, just because the logistics of bringing in so many world leaders with their security details and planning for the event,” the national security adviser said.

“So I think it would be later in June, but, again, it's a chance for the leaders of the democracies of the free enterprise countries to get together and decide how to get their economies reopened and how we can work together to make sure that we all come out of this COVID crisis and bring back health and peace and prosperity for our peoples,” O’Brien said.

“We learned this week, because the president shared it, that he's been taking hydroxychloroquine along with zinc. He also mentioned he's been taking azithromycin. Is there a national security risk for the commander-in-chief to be taking a medication that the FDA warns the public there is risk of having heart problems? And are there other drugs that the president is taking?” Brennan asked.

“Well, I'm not aware of the-- of any other drugs that the president's taking, but he's in close consultation with his physician, Commander Sean Conley, a Navy physician, who's an outstanding doctor, and I'm sure they are doing the right regimen for President Trump,” O’Brien asked.

“I can tell you with the antimalarial drugs I've spent a lot of time in Africa over the years, and I have taken antimalarial drugs with no side effects and no problems during that time, and so I think the president's under great medical care with Walter Reed and with Doctor Conley here at the White House, and I think he's doing the right thing for-- that he and his physician believe is good for the president,” he said.

"So I'm not concerned about his health. The guy's got more energy than anyone I've ever seen. He works 16, 18 hours a day. So I don't see any change in his strong performance as a result of whatever health regimen he is under undergoing,” the national security adviser said.

O’Brien indicated that the administration is considering cutting off travel from Brazil, because of the spike in coronavirus infections, and because it’s an area that Dr. Anthony Fauci, director of the National Institute of Allergy and Infectious Disease, who serves on the White House Coronavirus Task Force, said he’s very concerned about.

“As far as travel to Brazil goes ... I think that we'll have a 212(f) decision today with respect to Brazil and just like we did with the U.K. and-- and Europe and China--and we hope that'll be temporary, but because of the situation in Brazil, we're going to take every step necessary to protect the American people,” the national security adviser said.

“So that sounds like you are looking to cut off travel from Brazil and the Southern Hemisphere,” Brennan said.

“Well, as of now, I'd say Brazil, and we'll take a look at-- at the other countries on a country by country basis for sure,” O’Brien said.