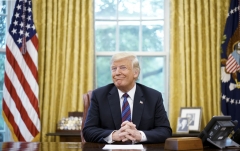 “It’s a sad day for America. It’s a sad day for Facebook, because I can tell you, a number of members of Congress are now looking at, do they break up Facebook, do they make sure they don't have a monopoly, and I can tell you that it is two different standards - one for Donald Trump and one for a number of other people that are on their sites and suggesting that more nefarious things than what the president has been accused of actually go unnoticed often,” he said.

“So this is a sad day for America but a sadder day for the Facebooks of the world who have actually enjoyed a very wild, wild west kind of regulatory environment. I can tell you that's going to change. The discussion will happen within hours of this decision on Capitol Hill just a few blocks from where I am,” Meadows said.

Both Sens. Elizabeth Warren (D-Mass.) and Josh Hawley (R-Mo.) both want regulations on Big Tech but for different reasons, host Dana Perino pointed out, adding that it could be an opportunity for bipartisan legislation to break up Facebook’s monopoly.

“I would suggest that it’s not going to be regulation they look at from the legislative standpoint. This is going to be a breakup of big tech. When you look at Google and Facebook, they have more power over what we read and what we see than any in the media,” Meadows said.

“We look at -- and very critically at people buying TV stations to say that they shouldn't have a monopoly, and yet Google and Facebook and YouTube actually control much of what America sees, whether it's you and I talking right now and it gets reposted on any of those platforms, they have the ability to actually raise that profile or lower it, and so it is time that we break up Big Tech, not just regulate them,” he said.

Meadows said it doesn’t matter if Facebook suspended the former president’s account for six months or six days, “what we see in this decision is really about chilling free speech, and the platform that the president put up yesterday is just step one of about a four-step process to make sure that millions and hundreds of millions of people actually get to hear from their president.”

“When you look at over 74 million people that voted for President Donald Trump and to suggest that he should not have a voice, today there may be people on the left that are applauding that but what if it goes and says all right, we're going to make sure that Bernie Sanders doesn't have a voice?” he said.

“Listen, I'm all about making sure that everyone who wants to have a voice in the public square can do that, but we need to have some standards and literally what we're seeing is they’re not able to police themselves and what they're doing is it’s infringing on constitutional rights. They've gotten too big. It’s time that they be broken up,” Meadows added.

He said that constitutionally Facebook has the right to block the president, but they can’t also enjoy the benefits of being a monopoly and being safe from litigation.

“Well, they do have the right. I mean obviously a platform has the right of what they are able to do, but they can't enjoy the benefits of one, being a monopoly, and two, of not having any litigation that comes against them for any type of discrimination or disparate impact that may result from that,” Meadows said.

“And so a private company can do a lot of things but what they shouldn't have is the protection of the federal government, which when these platforms were put up, there was not a content monitor. You had a contract, you had something that you actually did and what they are finding now is that they become the social police for what is good and right,” he said.

“We've seen it too many times where they take down posts. Facebook, YouTube, they say your reach is too great. We need to moderate that and I can tell you that conservatives and those progressives will come together and find some unity on this particular issue. You're right, for different reasons but it’s a perfect storm that will not bode well for the Facebooks and YouTubes and Googles of the world,” Meadows added.

When asked whether the former president plans to run for office again, Meadows said, “Well, I can tell you based on my conversations with him. and I don't work for the president. Obviously, We speak very often. It’s not necessarily a wait until 2022. Some are advising him to do that. I can tell you he’s fully engaged about taking back the House and Senate in 2022 but really, it’s about being fully engaged now.

“There’ll be rallies that will happen very soon. The vast majority of Americans want him to throw his hat back in the ring, and if I had to place a bet on it, I would say that he would do exactly that based on my conversations with him, but listen, what you'll see in the next two to six weeks is a ramp-up of additional platforms where he’s able to communicate once again and take his message to the American people,” he said.

“Yeah, you know, I fully -- there are discussions now about him actually going back out to have rallies and rally America for what it’s all about - America first. Joe Biden is all about America last. It’s about putting forth that contrast. We’ve not seen the last of Donald Trump as a candidate,” he said.

Asked how far along are those discussions for a rally, Meadows said, “You know, Bill, I don't normally talk about my conversations with the president so I’m not going to get into any specifics. I can tell you that they are voluminous and had a number of discussions. He and his team will decide when the best time for that to happen, but they're not just idle conversations. They’re real discussions about when and where.”

“We're in a very good position to win back the House in 2022. Part of that is because Donald Trump continues to be -- loom large in the Republican conference, and we saw just the results in Texas just a few days ago where the Trump-endorsed candidate came in number one in a very large field, but it is more than that,” Meadows said.

“It’s the Biden policies that continue to lurch to the left that Americans, they want to make sure they keep more of their hard working American taxpayer dollars in their pocket, and Joe Biden has gone on a spending spree that not only will affect their pocketbook but the pocketbook of all Americans,” he said.