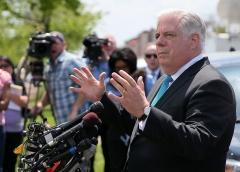 (CNSNews.com) - Republican Maryland Gov. Larry Hogan called out Republican senators who say they will not vote to accept the Electoral College votes from disputed states until a special commission is appointed to audit the presidential election returns from those states.

Hogan tweeted Sunday that rejecting the certification of the presidential election “makes a mockery of our system and who we are as Americans.”

“Throughout my lifetime, American democracy has been a beacon of light across the world. Freedom-loving people have marveled at America because the people -- not the politicians --- elect the president, and the politicians accept the result,” the governor said in a statement.

“The scheme by members of Congress to reject the certification of the presidential election makes a mockery of our system and who we are as Americans,” Hogan said.

He said that President Donald Trump’s legal team did not provide evidence supporting claims of widespread voter fraud and those “allegations” were rejected by Trump-appointed judges and the DOJ.

“President Trump and his team have had every opportunity to provide evidence supporting their claims, and they have failed to do so. Their allegations have been flatly rejected by Trump-appointed judges and a Trump-appointed Justice Department alike,” Hogan said.

“All 50 states have now certified the presidential election. Governors, judges, and Secretaries of State have all done their job, regardless of the political consequences,” the governor said.

“Whether or not you like the result, the process worked as it always has. What’s not working is that far too many politicians in Washington seem to have forgotten the basic principle that they are beholden to the people, not the other way around,” he said.