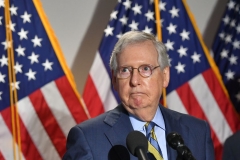 Senate Minority Leader Mitch McConnell R-KY speaks to the media after a Republican policy luncheon at the US Capitol in Washington, DC on June 9, 2020. (Photo by MANDEL NGAN/AFP via Getty Images)

(CNSNews.com) – Senate Majority Leader Mitch McConnell (R-Ky.) called out Democratic politicians on Tuesday for encouraging and even joining Black Lives Matter protests which consist of hundreds of participants while still banning churches from holding religious services with more than 10 people in attendance.

McConnell said that he’s grateful that law enforcement has been able to quell the looting and rioting that overshadowed the protests, and he thinks America is ready to consider how Floyd’s memory can spur progress in combating racism.

“Several times now, I’ve praised the peaceful demonstrations protesting racial injustice and the killings of black Americans. I’m grateful that after several harrowing days of looting and riots, law enforcement restored order and helped these peaceful protesters be heard. Notwithstanding, the far left calls to disband the police altogether,” McConnell said in a speech on the Senate floor.

“I believe most Americans are ready to consider how the memories of black Americans like George Floyd and Breonna Taylor can move us to continue combating residual racism. Today, Madame President, I need to discuss a different pressing problem that concerns Americans’ constitutional rights,” he said.

McConnell said that the protests, however, have led to a “double standard” among state and local leaders.

“It’s becoming clear to many Americans, including many who appreciate and applaud the recent protest, that our national life during this pandemic has slid toward a double standard. For weeks, state and local leaders put normal American life totally on ice and asked citizens to prioritize fighting the virus. For weeks, the mainstream media heaped scorn on any small citizen protest, outdoor gathering, or even the suggestion that other important values might require a re-appraisal of certain restrictions,” he said.

Well, the American people did their part. They made necessary sacrifices that clearly helped the country, and they’re ready to continue doing their part as our reopening carefully proceeds, but now many Americans feel they’ve just seen those fastidious regulations and that puritanical zeal disappear in an instant because a new cause has emerged that powerful people agree with,” the majority leader said.

McConnell noted that Democrats like Michigan Gov. Gretchen Whitmer and D.C. Mayor Muriel Bowser criticized protesters for demonstrating against their governor’s decision not to reopen small businesses except for those they deemed essential. However, those same governors and/or mayors actually joined recent Black Lives Matter protests.

A month ago, small protest demonstrations were widely condemned as reckless and selfish.  Now massive rallies that fill entire cities are not just praised but in fact are called especially brave because of the exact same health risks that brought condemnation when the cause was different.

People just spent the spring watching their small businesses dissolve or cancelling weddings or missing religious observances for the longest spells in their lives or missing the last days of a loved one’s life and then missing the funeral.

Never were the American people told about any exemption for things they felt strongly about. I have no criticism for the millions of Americans who peacefully demonstrated in recent days. Their cause is beyond righteous. It is the inconsistency from leaders that has been baffling.

The same governor of Michigan who argued that letting people carefully shop for vegetable seeds would be too dangerous during the pandemic now poses for photographs with groups of protesters.

Here in the District of Columbia, the mayor celebrates massive street protests. She actually joins them herself, but on her command, churches and houses of worship remain shut. I believe even the largest church buildings in the District are still subject to the 10-person limit for things the mayor deems inessential.
The rights of free speech, free assemble, and the free exercise of religion are 1st Amendment rights. They have the same constitutional pedigree, but apparently, while protests are now permissible, prayer is still too dangerous. Politicians are now picking and choosing within the 1st Amendment itself.

McConnell said that Democratic leaders are discriminating against people based on the content of their speech.

These governments are acting like the coronavirus discriminates based on the content of people’s speech, but alas it’s only the leaders themselves who are doing that. It is now impossible to avoid the conclusion that local and state leaders are using their power to encourage constitutionally protected conduct which they personally appreciate while continuing to ban constitutionally protected conduct which they personally feel is less important.

In NYC, Mayor de Blasio makes no effort to hide this subjectivity. At one point, he recounted our nation’s history with racism, compared that to ‘a devout religious person who wants to go back to religious service,’ then concluded, ‘sorry. That’s not the same question.’

Well, Madame President, the American people’s constitutional liberties do not turn, do not turn on a mayor’s intuition. Politicians do not get to play red light, green light within the 1st Amendment. The Bill of Rights is not some a la carte menu that leaders may sample as they please. It’s hard to see any rational set of rules by which mass protests should continue to be applauded but small careful religious services should continue to be banned.

Weeks ago, citizens sued the mayor of Louisville, Kentucky, when he tried to ban drive-in Easter services while imposing no restrictions on the parking lots of secular businesses. A brilliant district judge had to remind him and the whole country that in America, faith can never be shoved into 2nd class. It seems at least for a few local leaders they still need to learn that lesson. I hope they learn it soon.

The American people’s response to the coronavirus was courageous and patriotic. On the advice of experts, our nation sacrificed a great deal to protect our medical system. Politicians must not repay that sacrifice with constitutionally dubious double-standard.